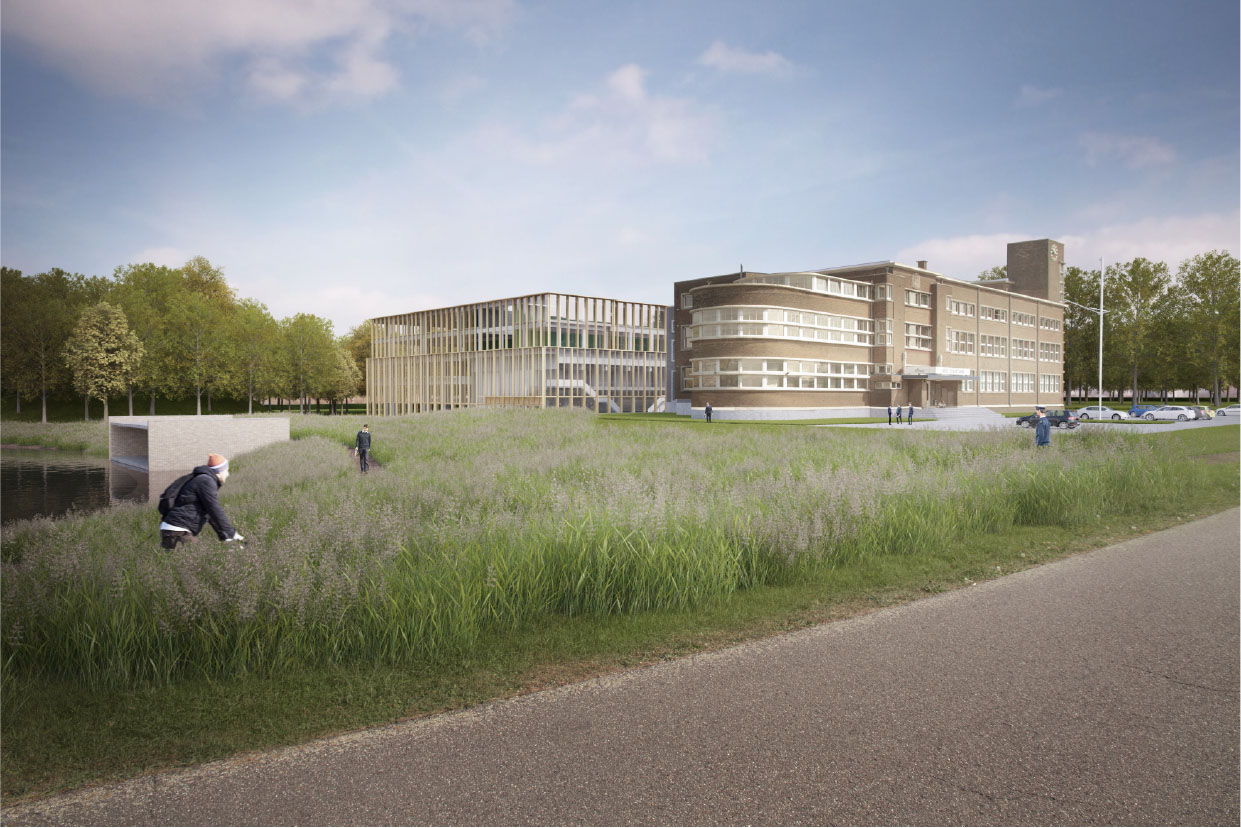 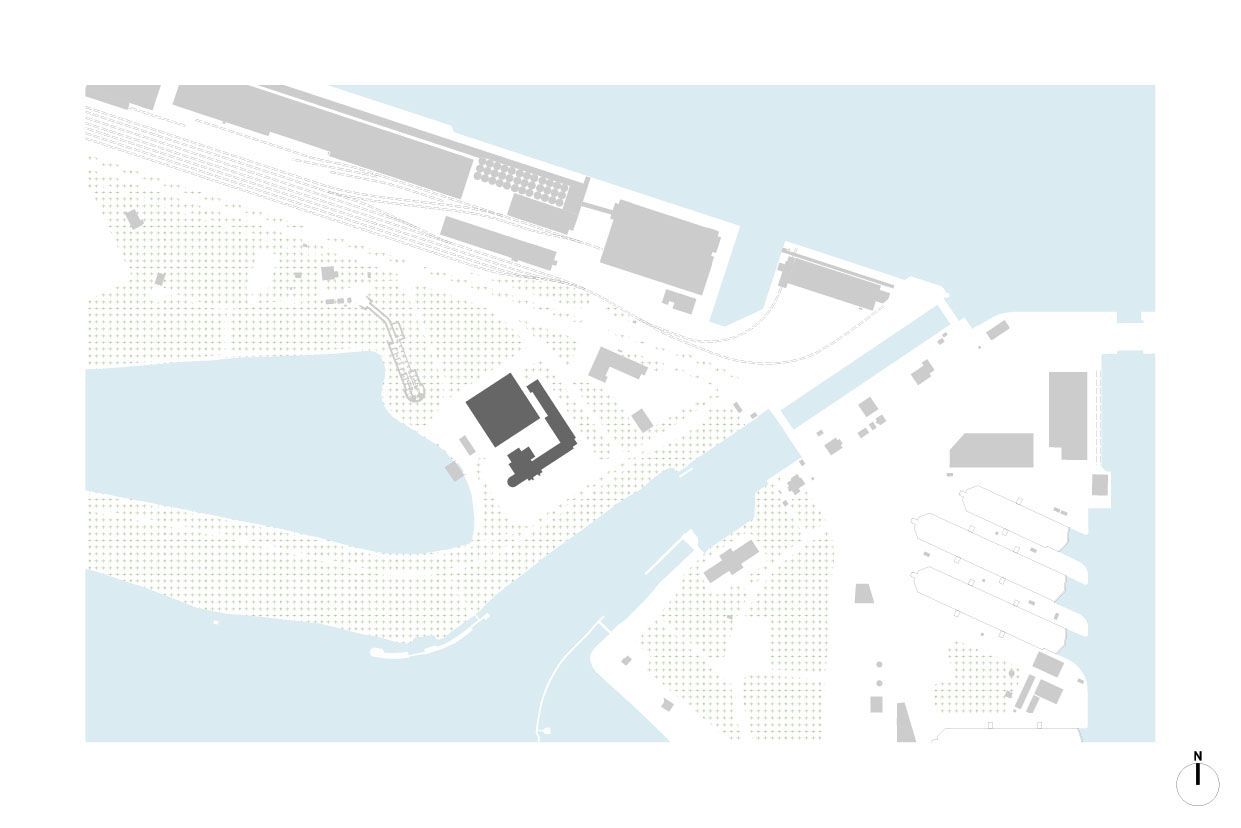 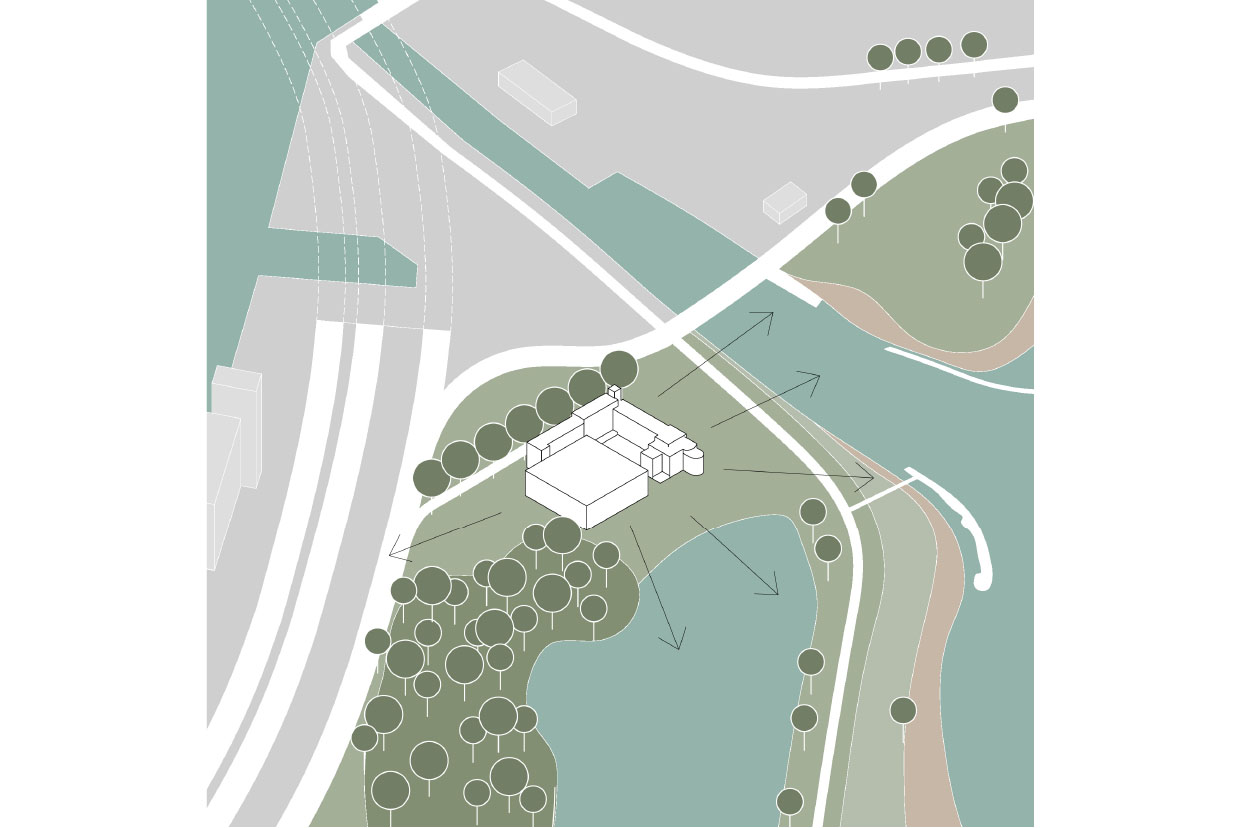 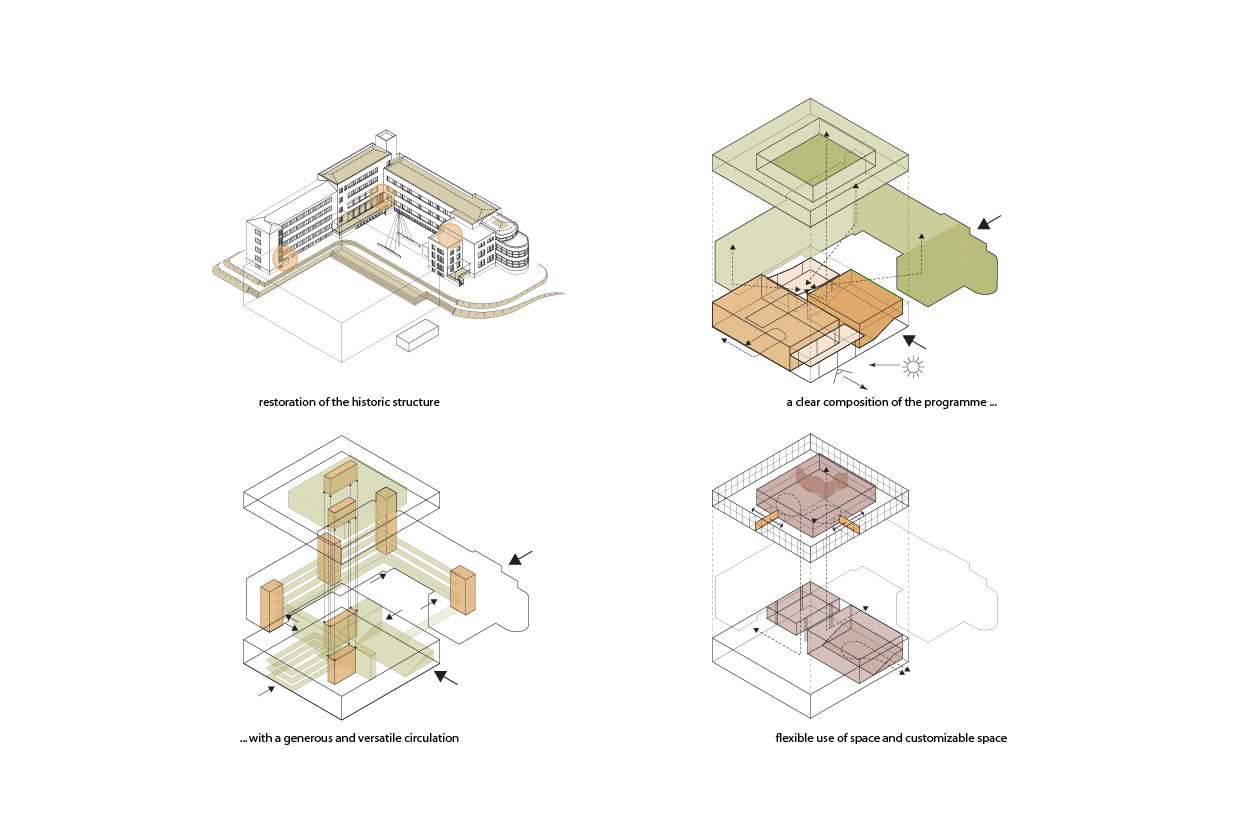 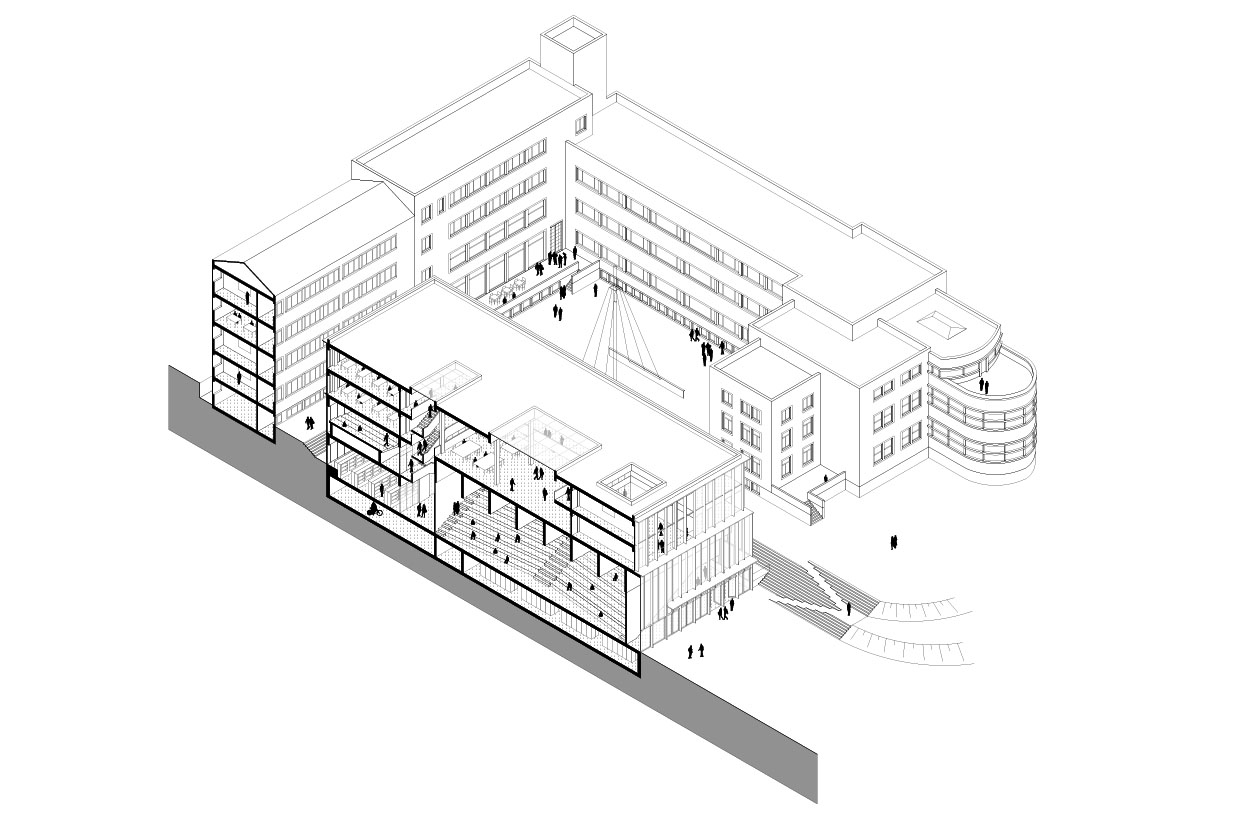 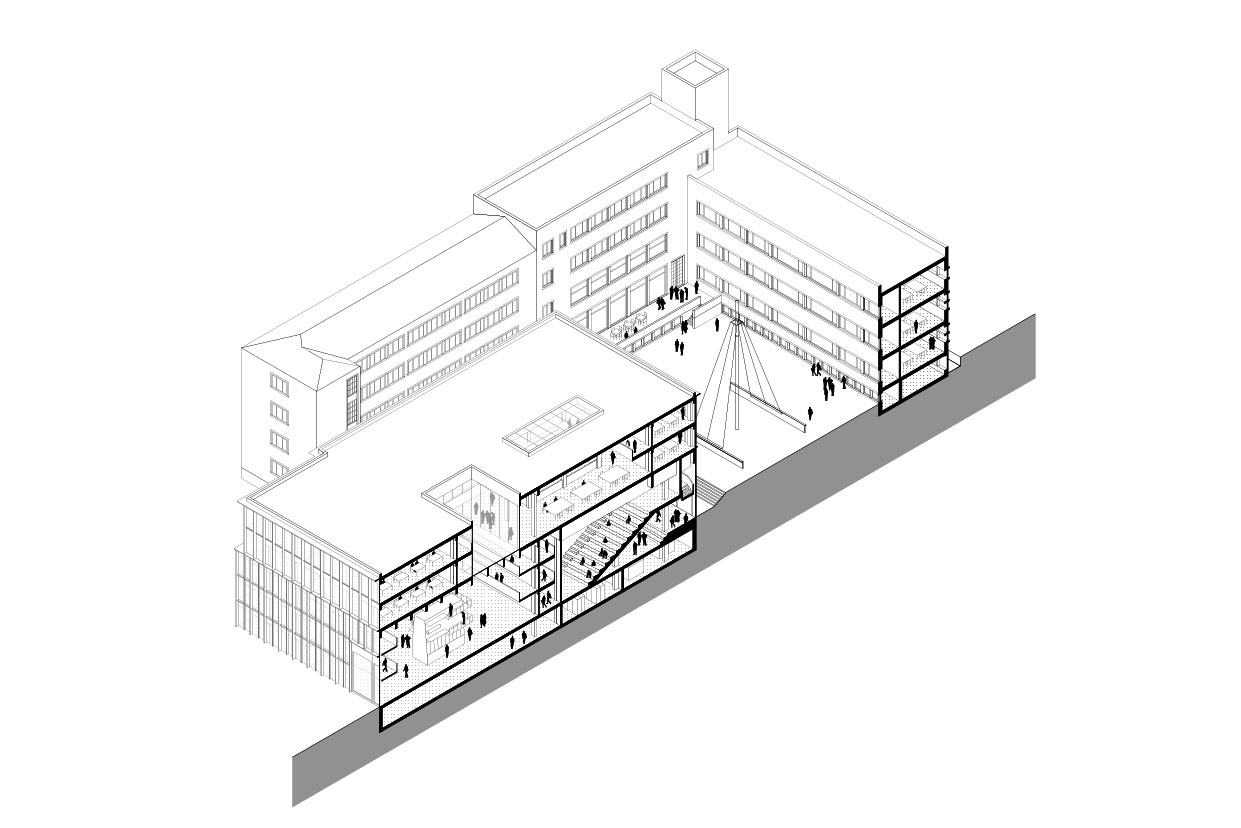 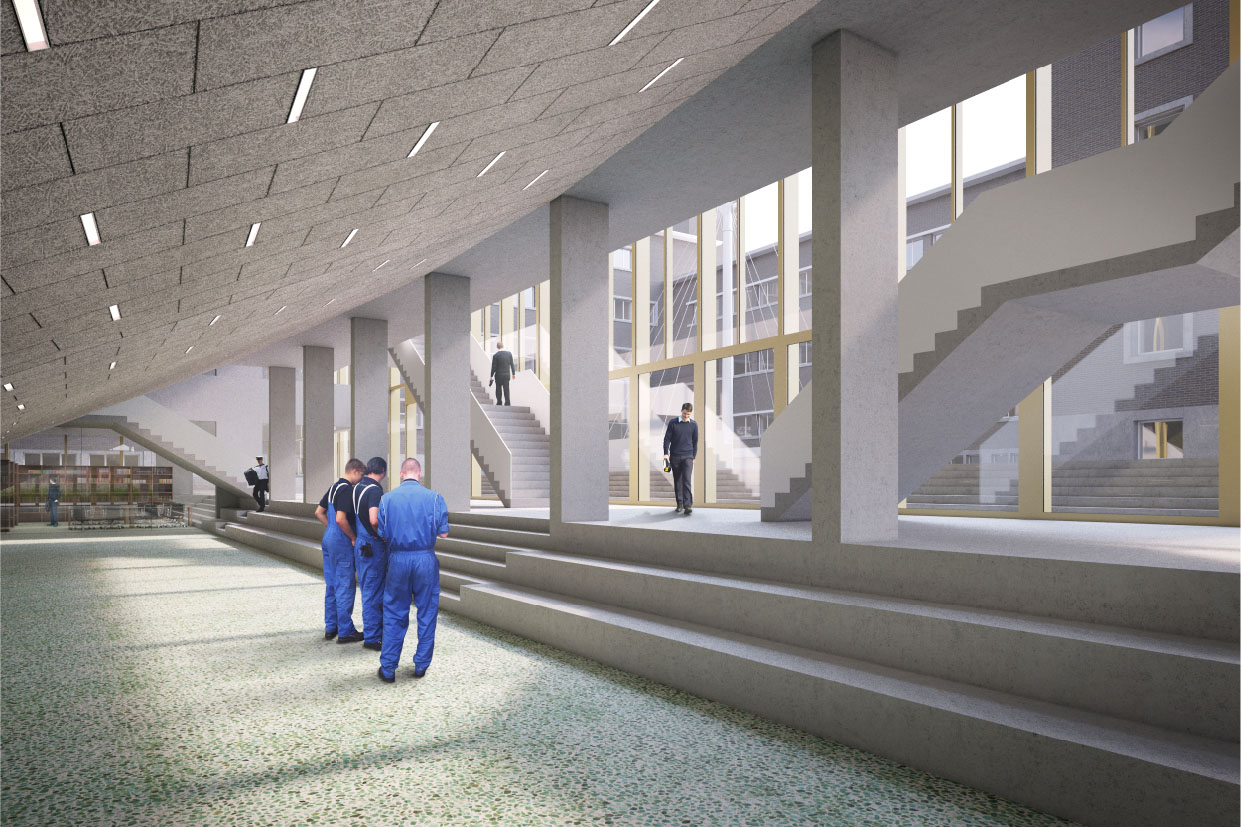 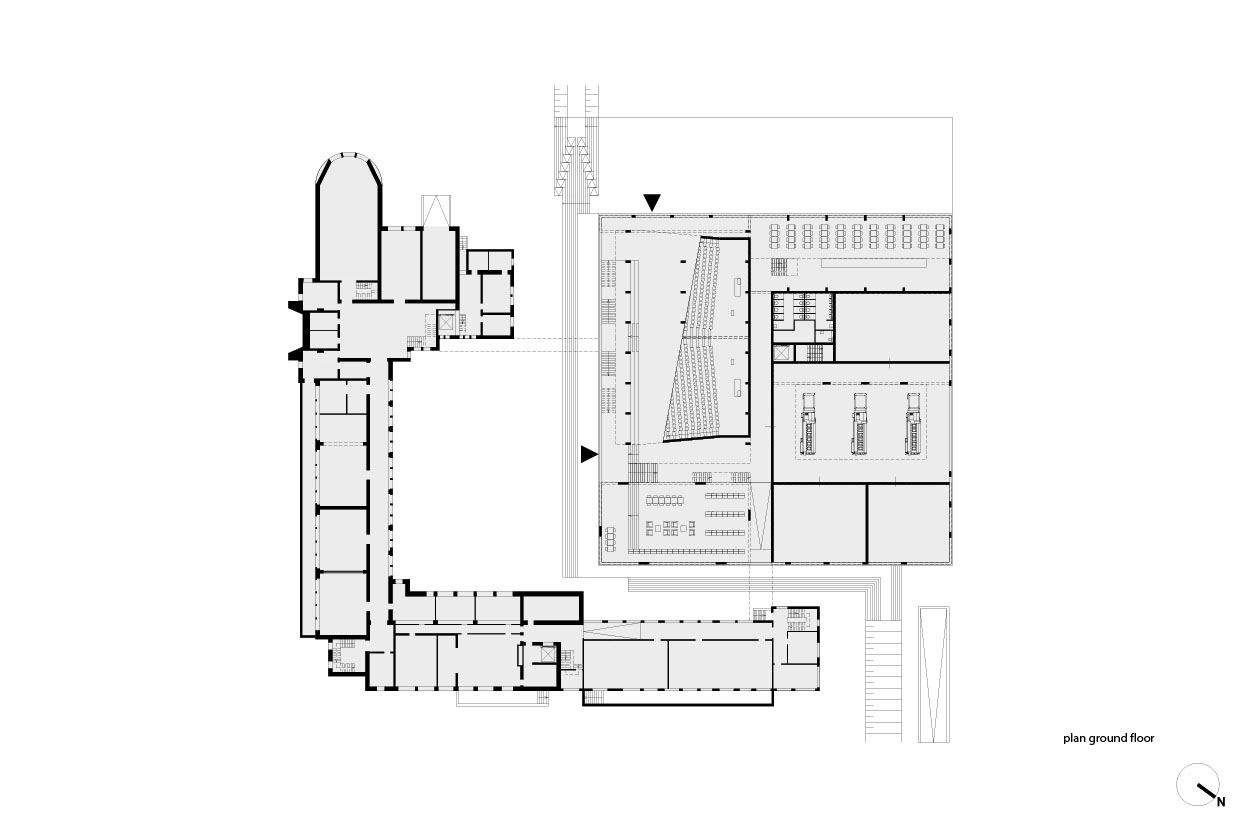 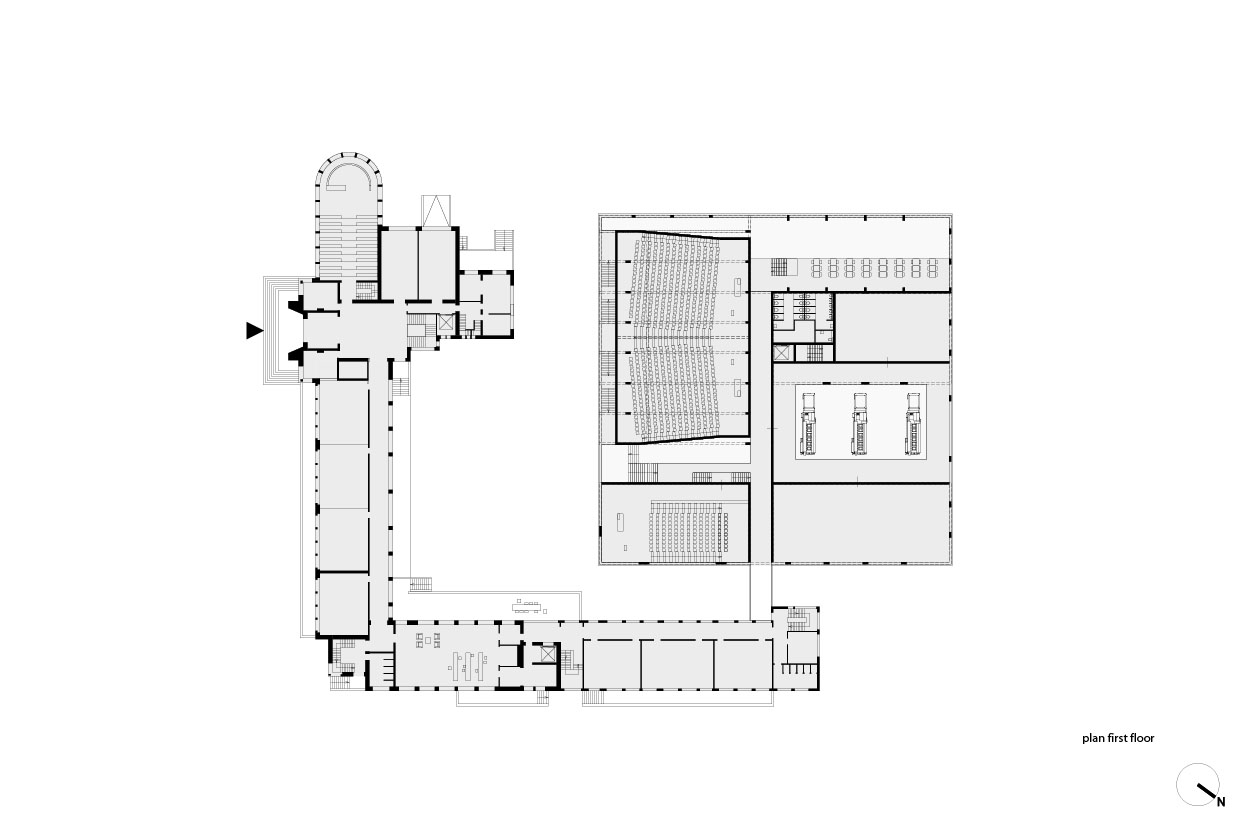 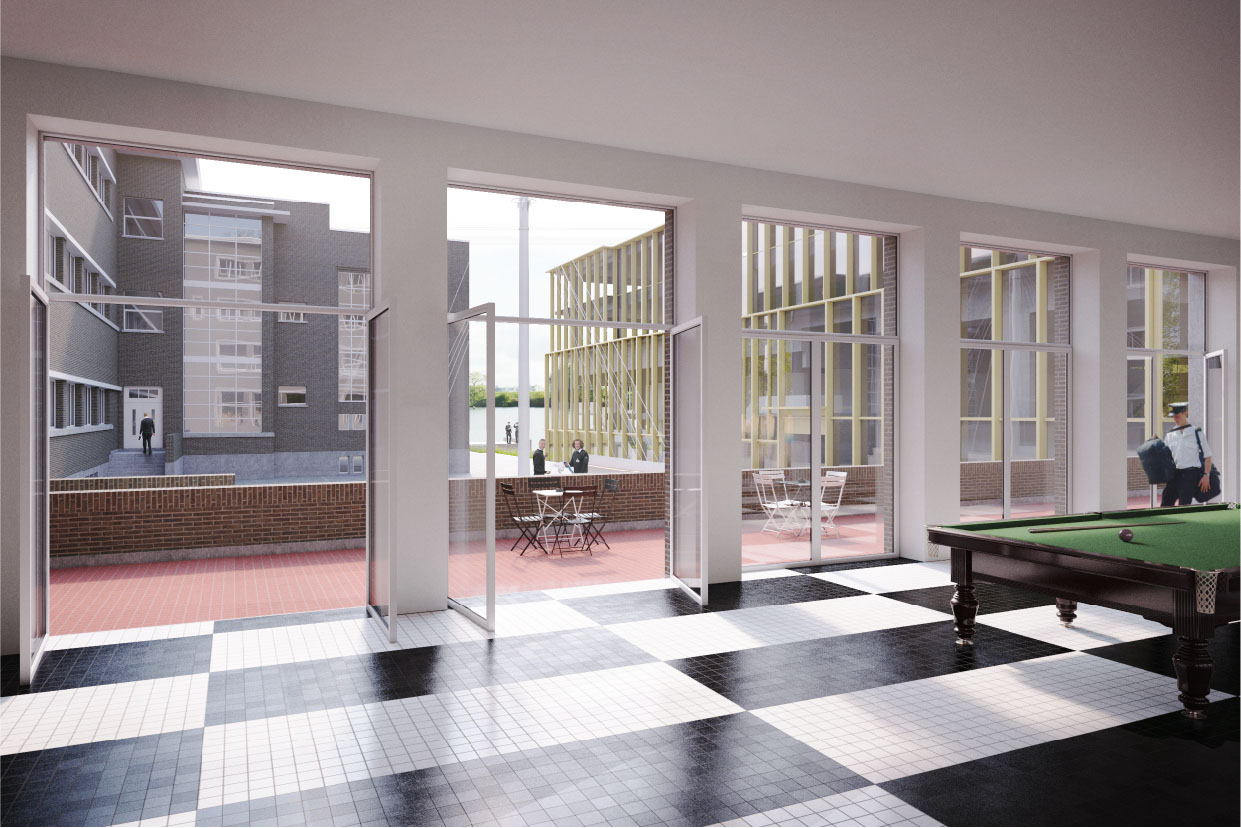 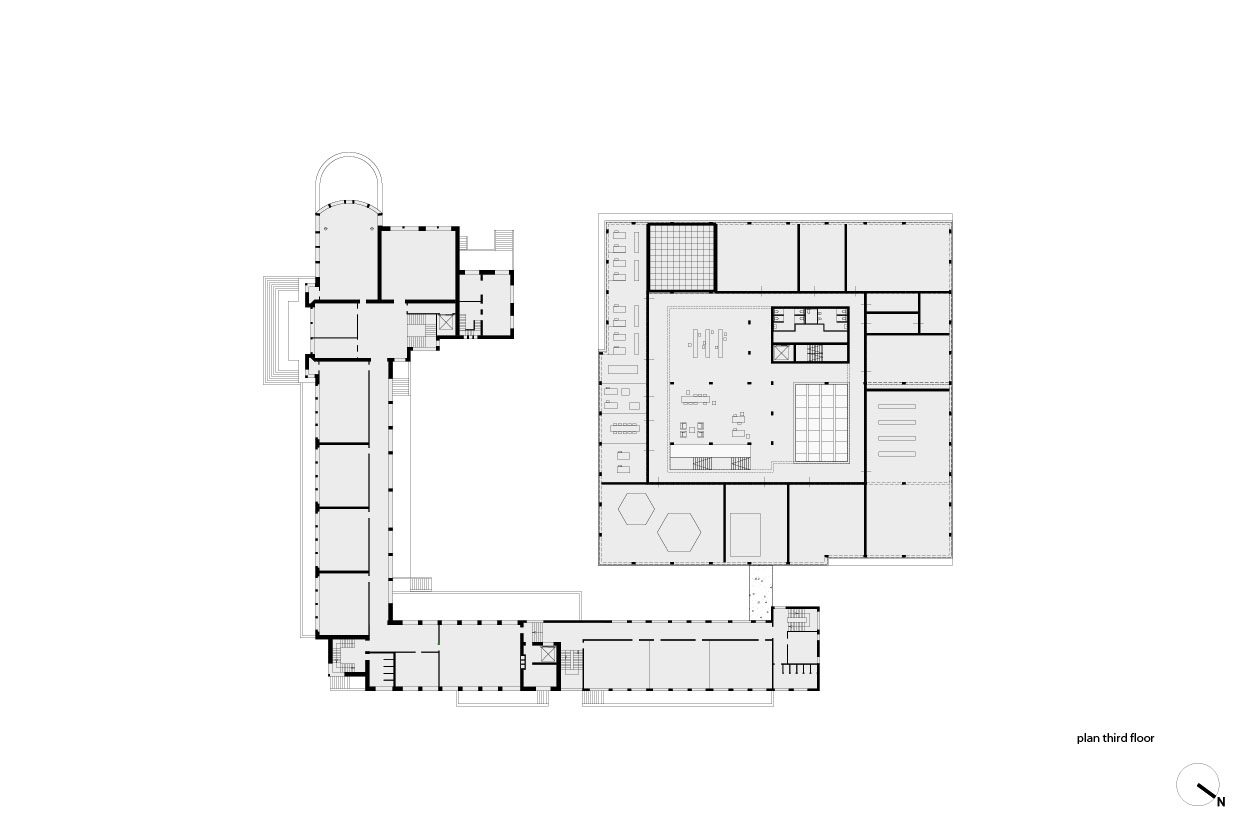 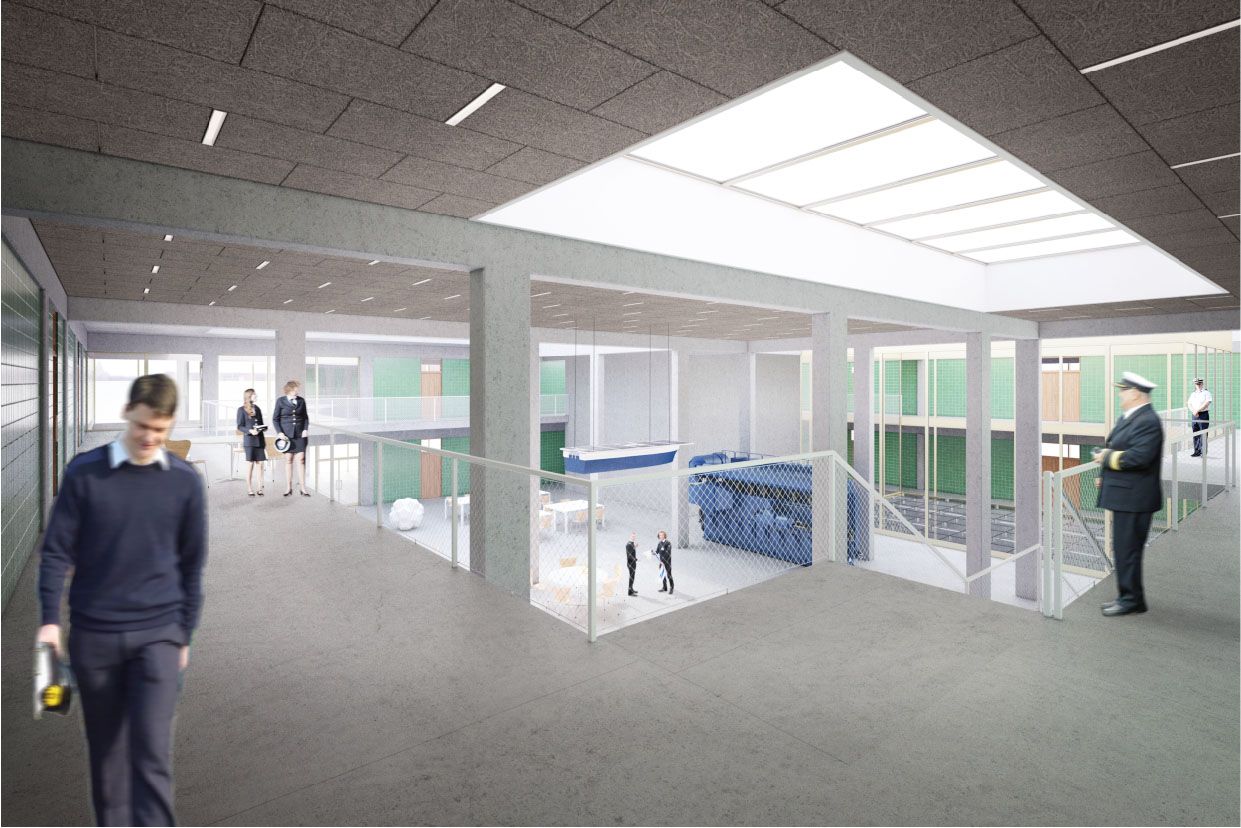 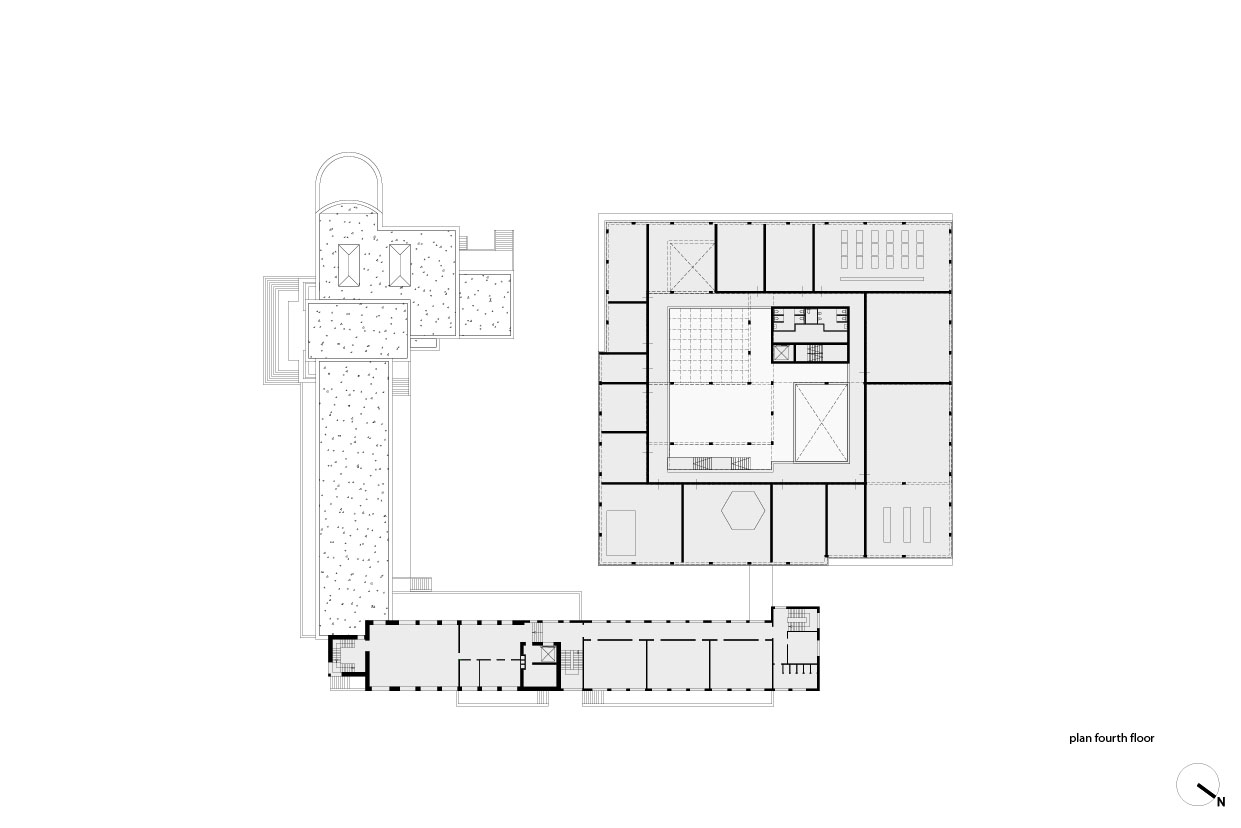 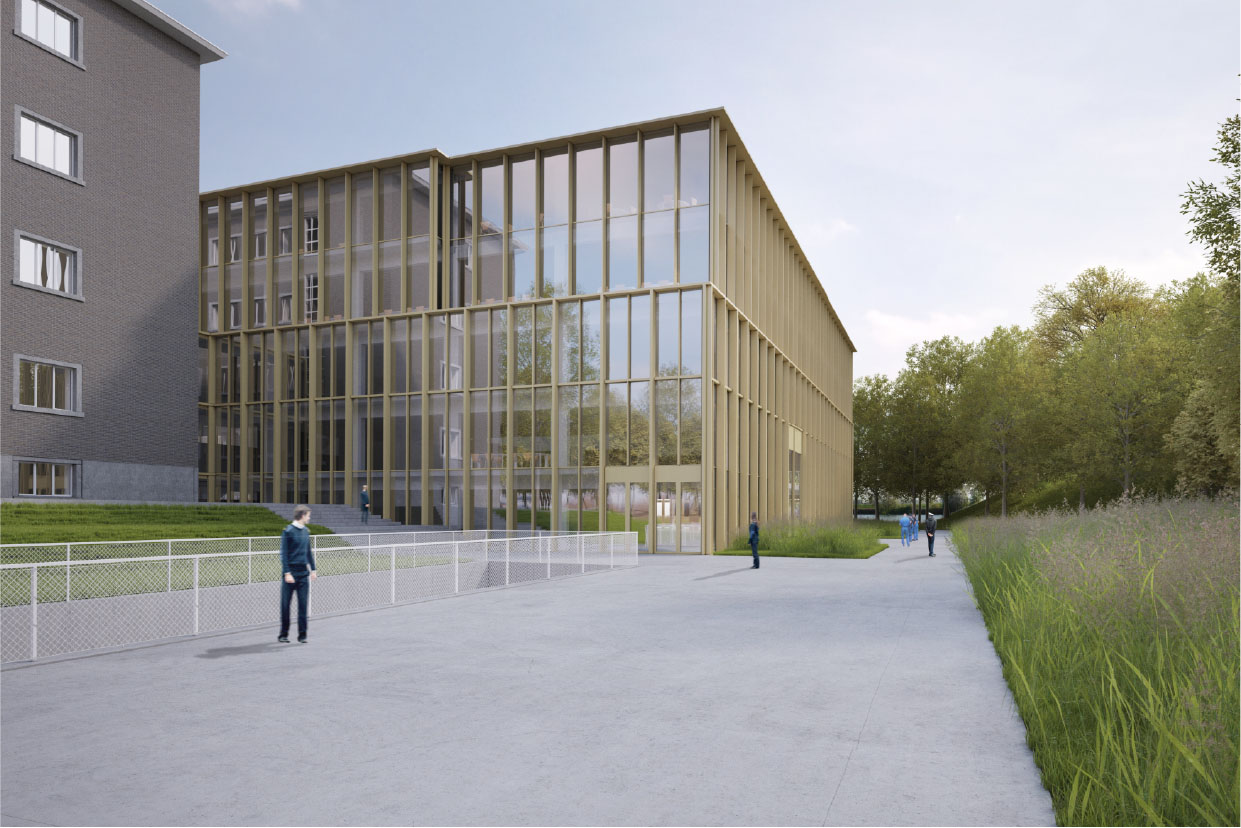 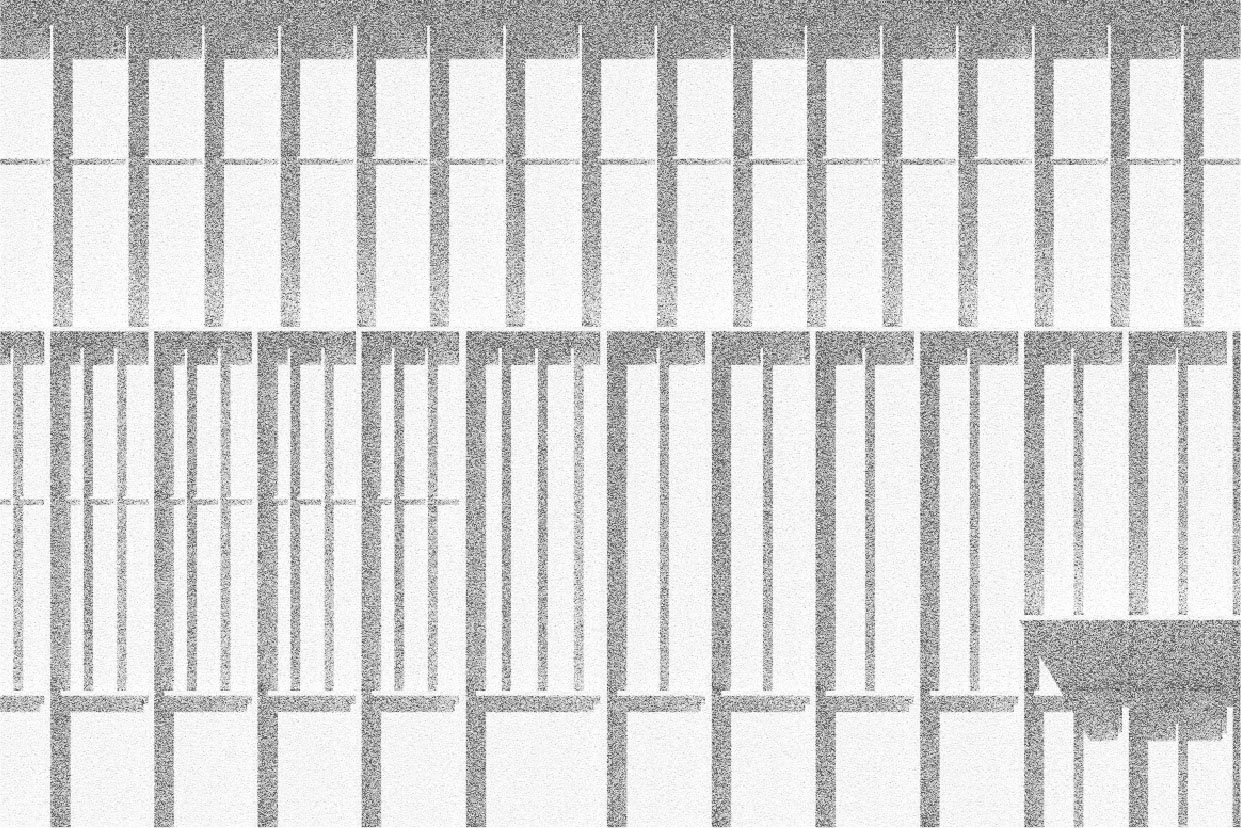 Our project proposal for the renovation and extension of the Antwerp Maritime Academy aims to offer a productive and sustainable solution to a number of interesting challenges:

The location between infrastructure and the Scheldt estuary.
The site is currently flanked by hard infrastructure on one side and the soft banks of the Scheldt estuary on the other. We therefore considered it necessary to bring additional clarity to the boundaries of the site. Our proposal thus comprises an extension of the levy landscape as far as Oosterweelweg. As a consequence, the river bank will remain of comparable depth to that of the future Dry Dock Park closer to the city centre. The ensemble of school buildings, the wall of the Noordkasteel and the pond together form a triangular reference frame within the larger landscape.

A compact and versatile volume, embedded within the landscape.
We made the decision to construct a compact volume that consciously avoids any attempt to replicate a literal extrapolation of the existing historical building but which instead, forms a respectful juxtaposition. The building is nestled within the historical embankment, which will be restored and extended to form a “constructed topography” connecting the ground floors of the existing main building and the new extension. This surface constitutes a continuous learning landscape comprising the historic building, the large auditorium, the marine engineering laboratories and the library alongside one another. The materialisation of the façades alludes to the copper that was commonly used in the architecture from the historic building's era. The texture and detailing are simple yet highly precise and meticulously finished.

A clear ensemble of programme elements ...
The marine engineering laboratories and the large auditorium form a dual structure within the building’s three-story-high plinth. The latter is complemented by an open space in which the library and the small auditorium above it are situated and an open space that will house the refectory. The library forms the pivot point between the historic building and the new, between externals and students. Above this plinth lies a ring of classrooms, workshops and offices for academic personnel organised around a centrally located and multifunctional learning centre.

... with a generous and potentially high-volume circulation.
Circulation in the new building is facilitated by a contiguous space which incorporates several generous subspaces. In the centre lies a three-storey-high axis which connects all functions within the plinth. It is connected to a closed circulation kernel and an open stairwell which offers access to the inner courtyard and thus a direct link to the learning centre at the top of the building. Beneath the large auditorium lies the foyer which runs through to the library. At the top of the building, there is a double-storey central space which enables circulation to and from the classrooms and workshops. As a result of its form and dimensions, this space also functions as a polyvalent learning centre.

Flexible and adaptable spaces.
The organisation of the various functions and rooms, the core spaces and general circulation, all results in a highly flexible and multifunctional use of the available space. The choice in favour of frame construction and a rhythmic façade structure also makes it possible to relocate the majority of internal walls if required.

Restoration of the historic structure.
The Maritime Academy itself boasts centuries of history and currently occupies an iconic building at an iconic location. Rather than attempt to improve on this existing context, it is on the contrary something which should be preserved. The building's plinth will therefore first be restored using an external coating which, as per the original design, follows the movement of the building. The use of bas-relief in the roofscape - of considerable importance to the symbolic value of the building - will be restored by removing all extensions and bringing back the terraces and skylights. The historic porticos opening onto the courtyard will also be restored to their former glory. The exterior carpentry will be renewed according to the original composition using narrow steel sections with high thermal insulation properties. And the exterior façades in brick and bluestone are to be cleaned and restored where necessary. Inside, those rooms of high heritage value will be meticulously restored while others of a more functional nature will evolve in accordance with present-day norms.