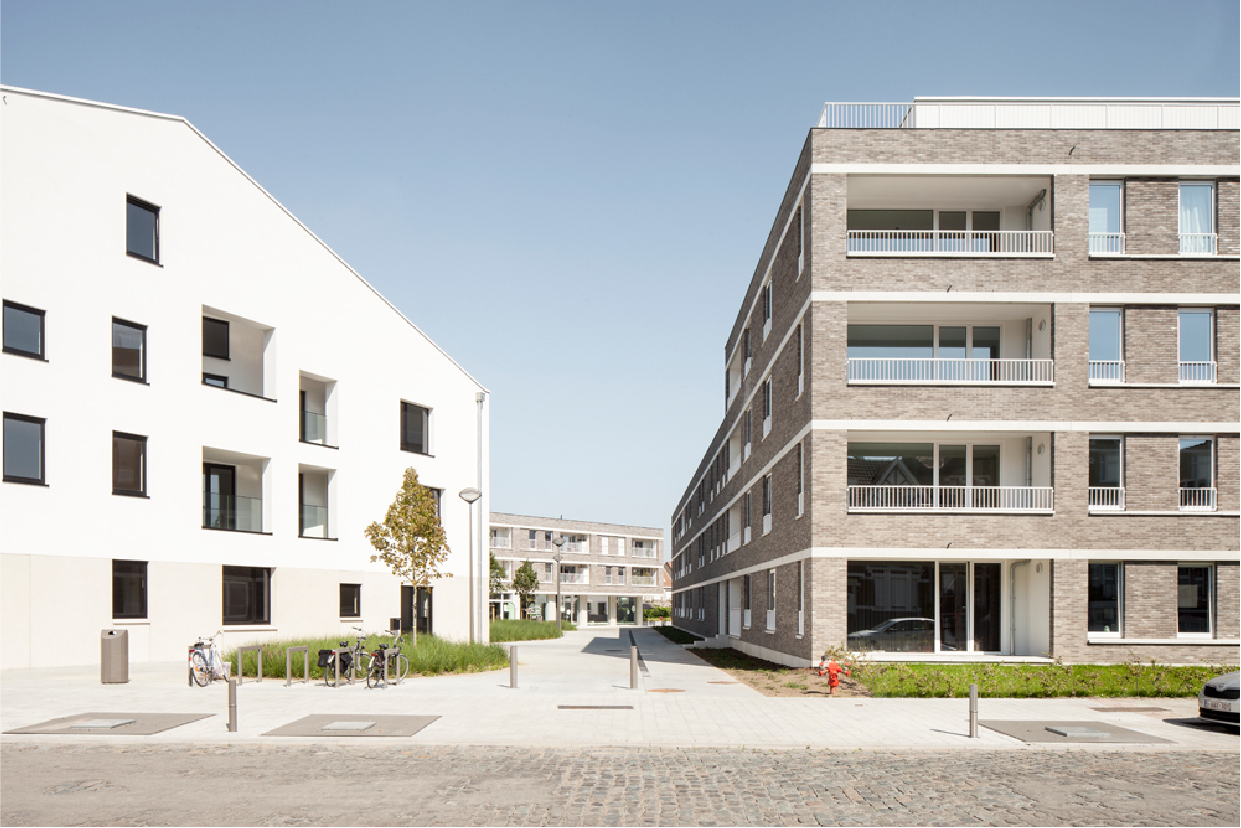 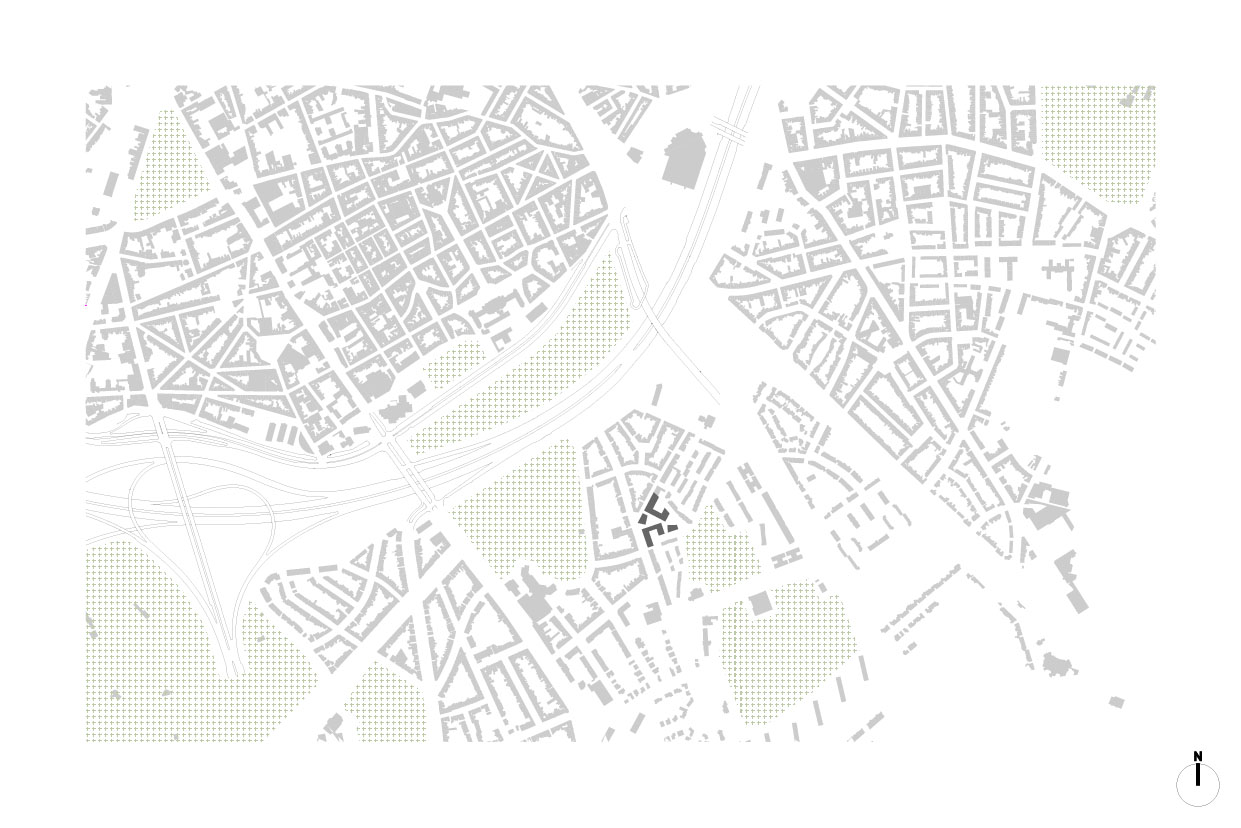 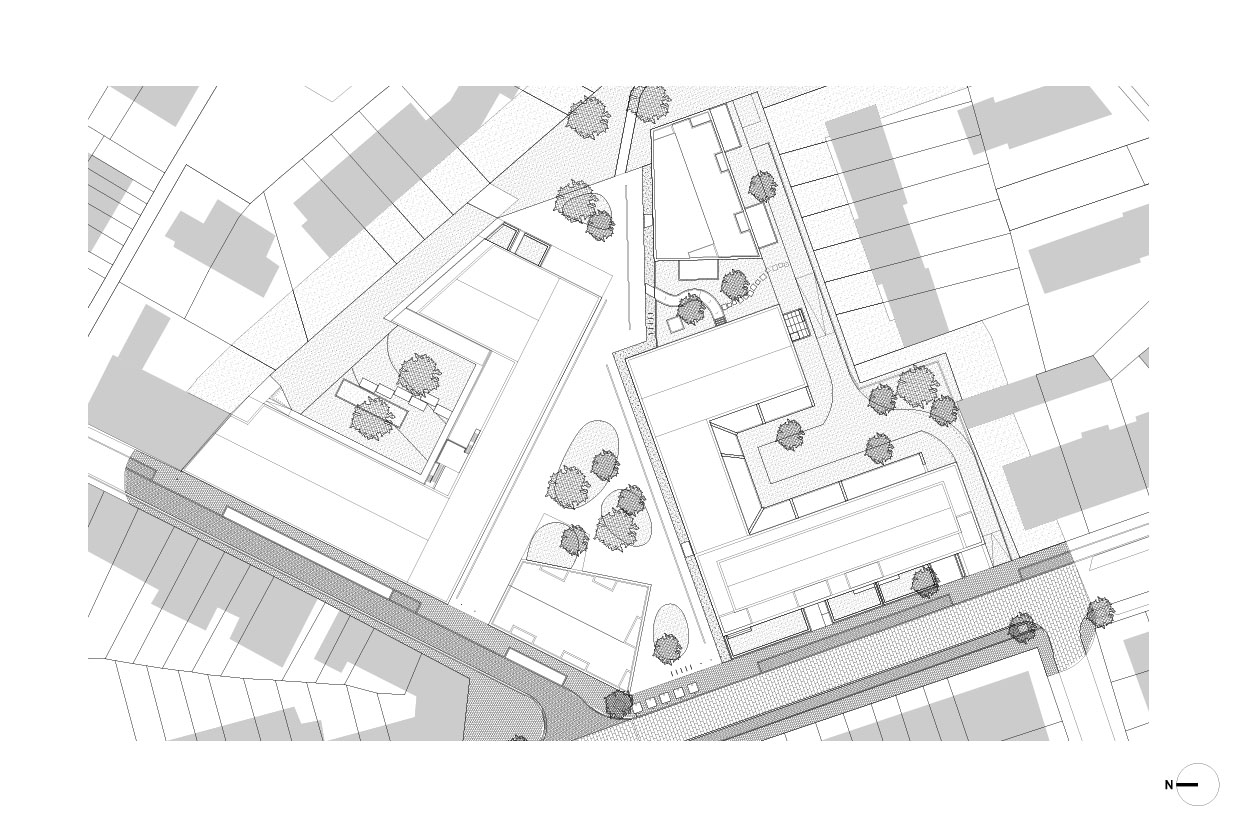 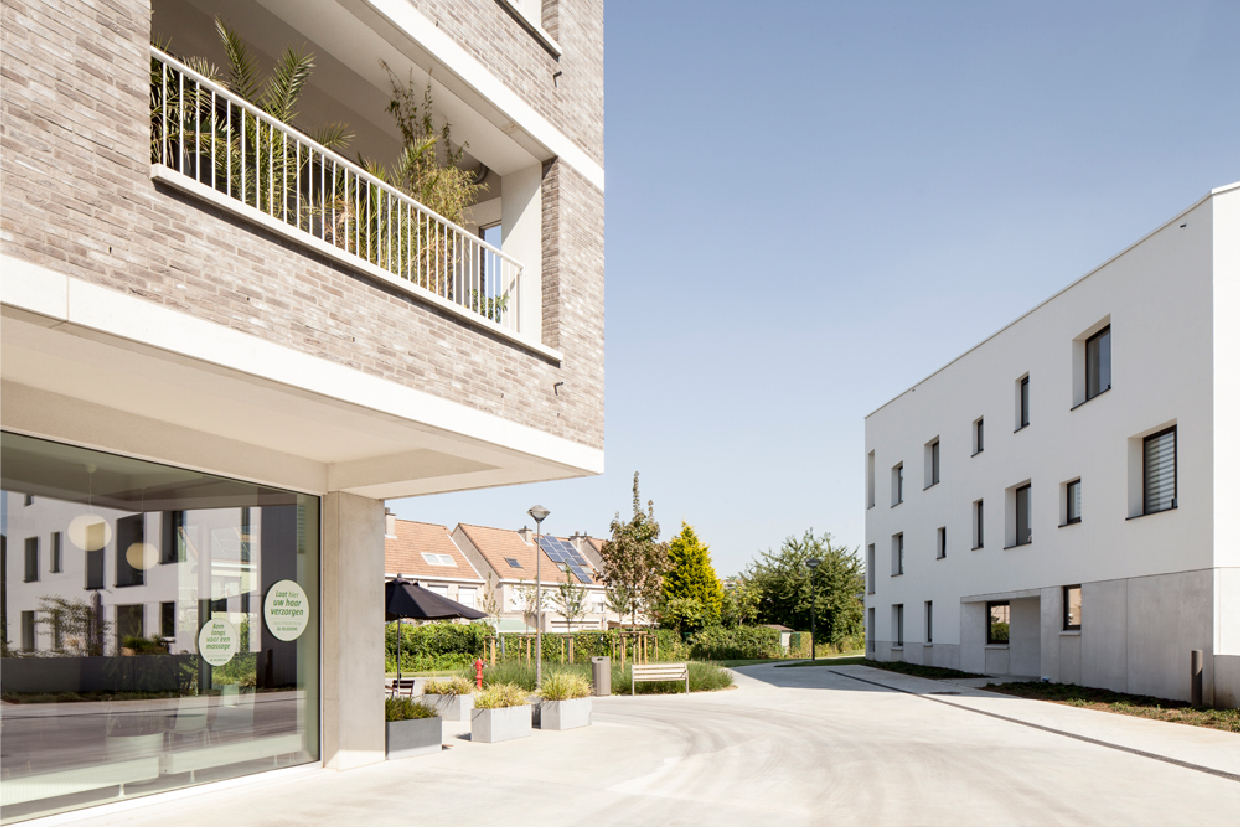 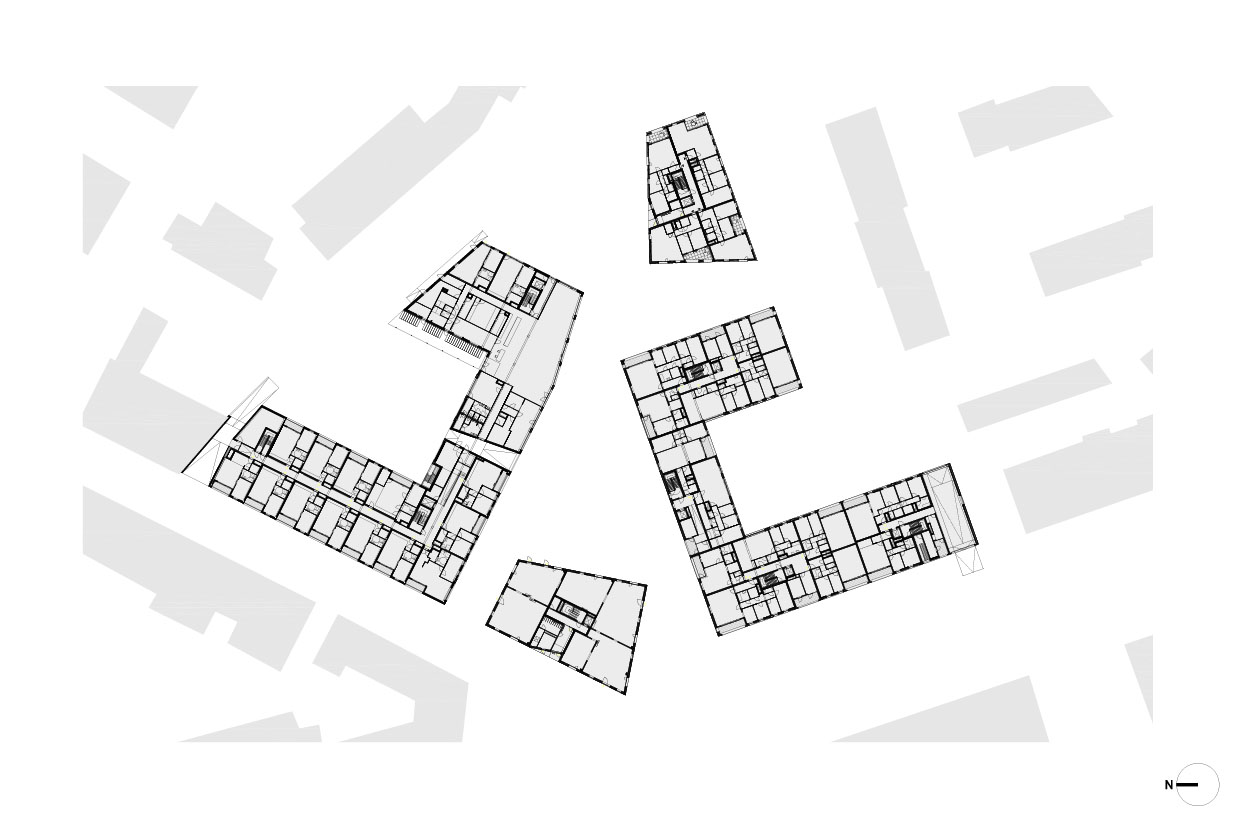 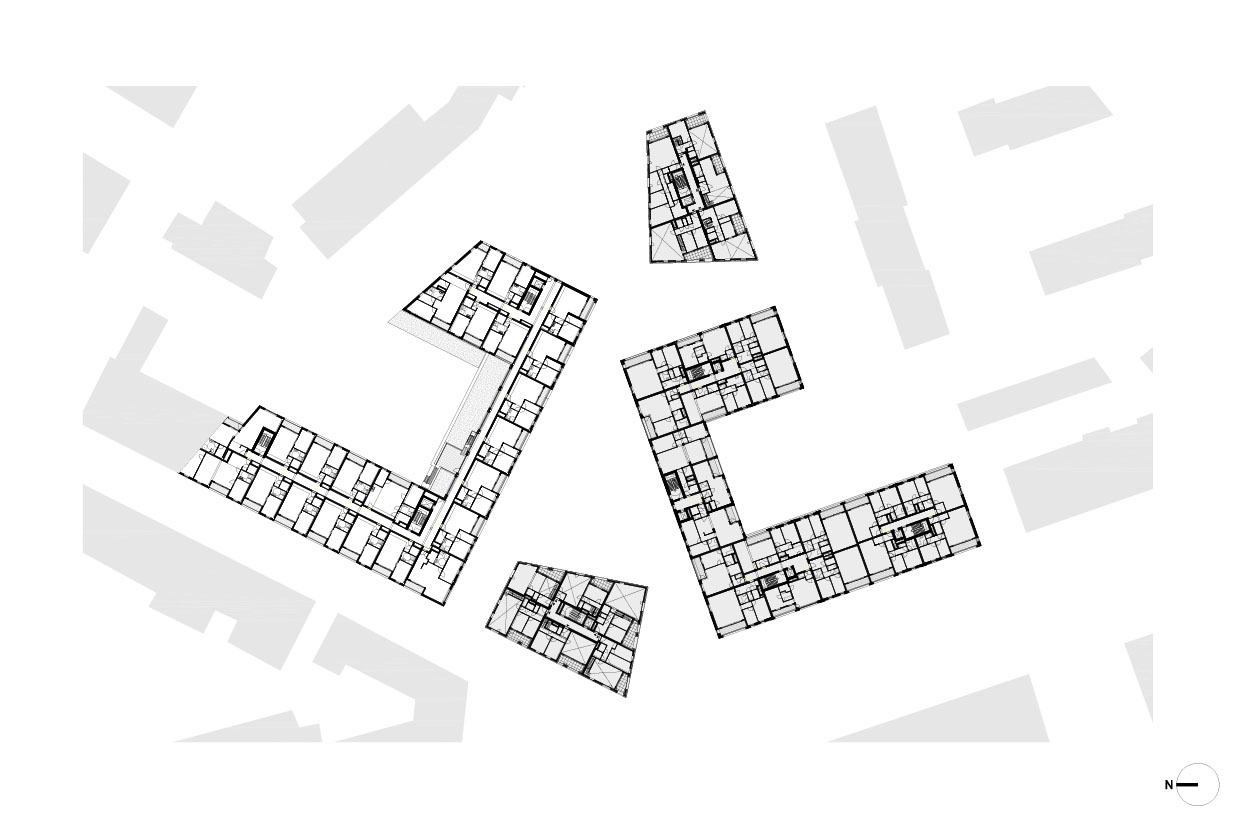 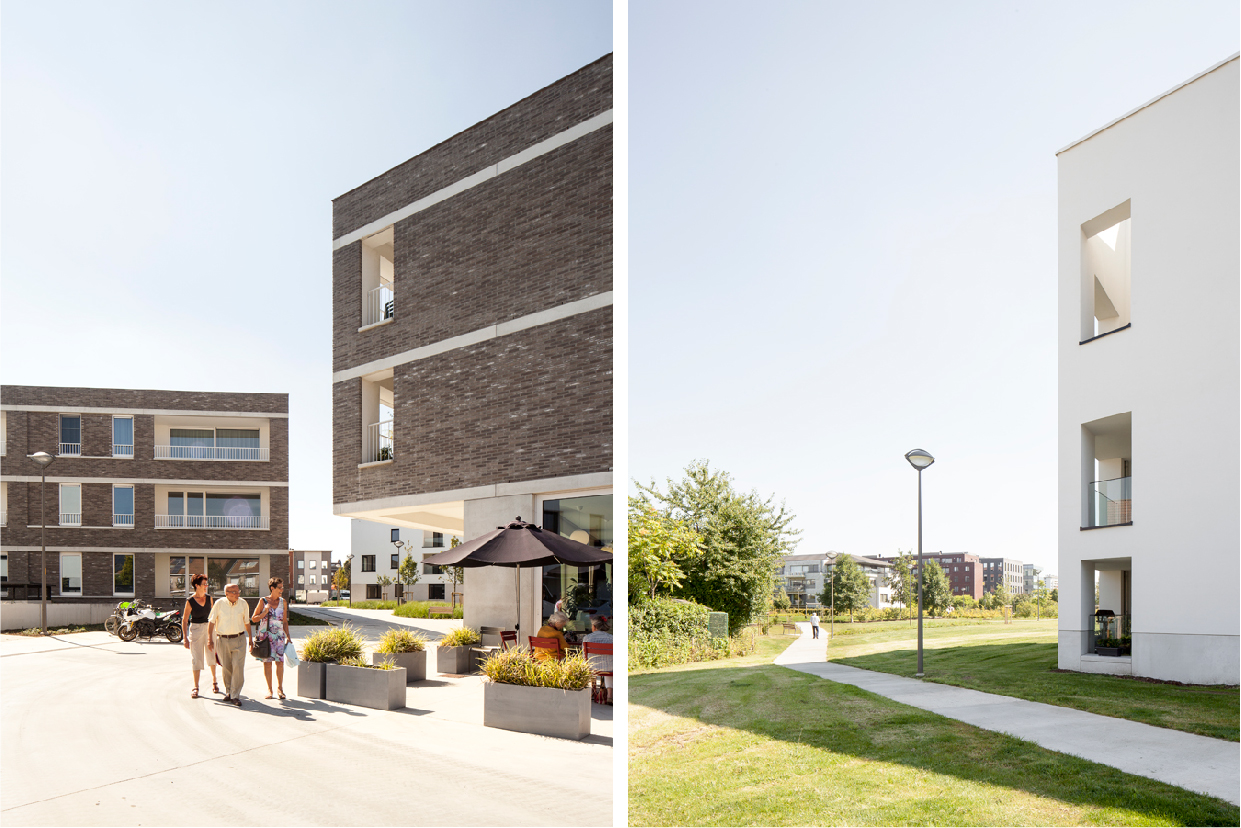 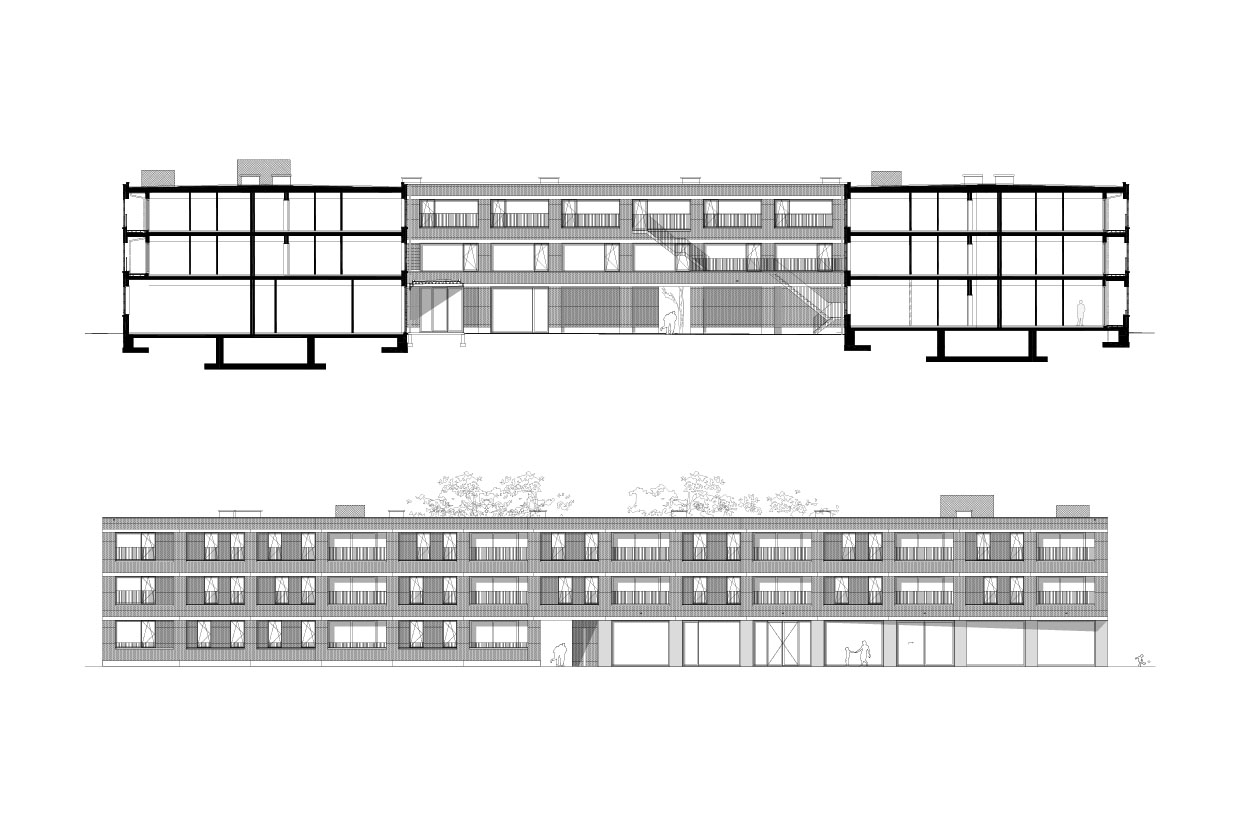 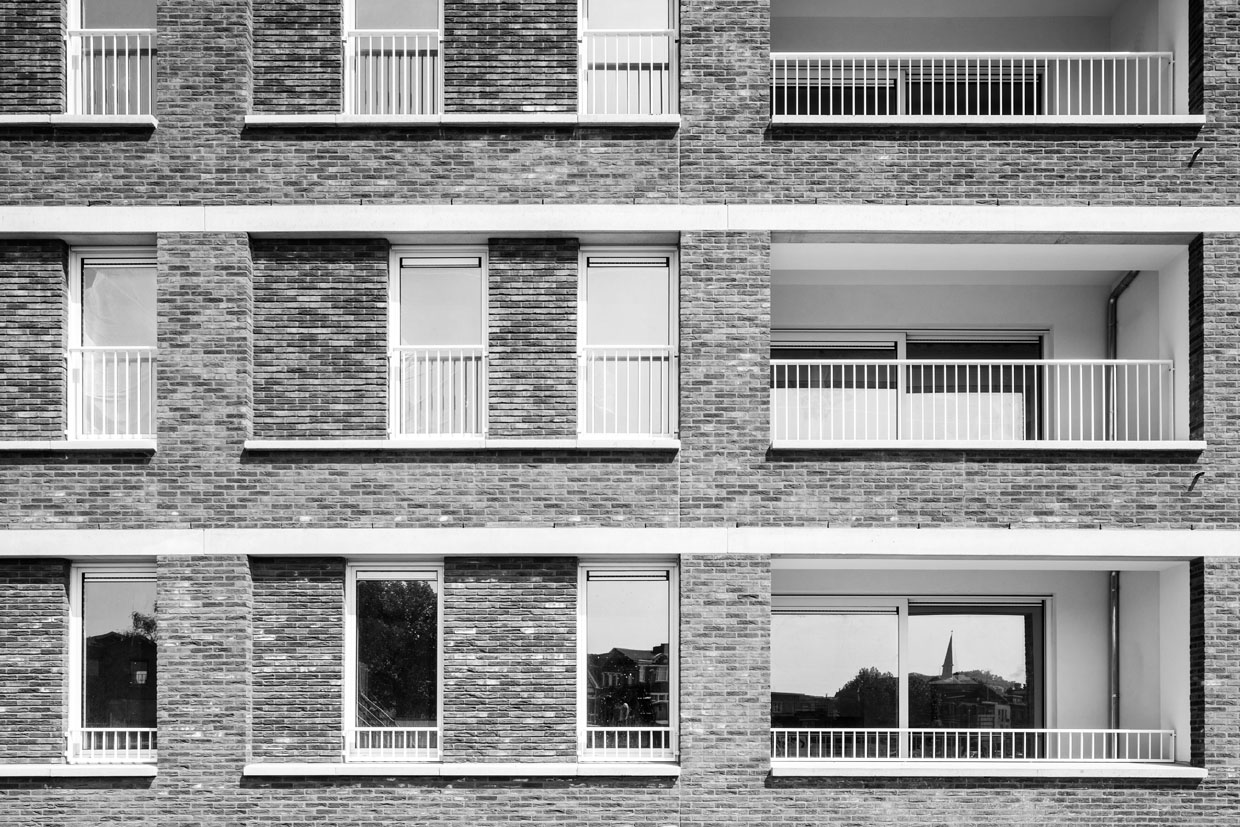 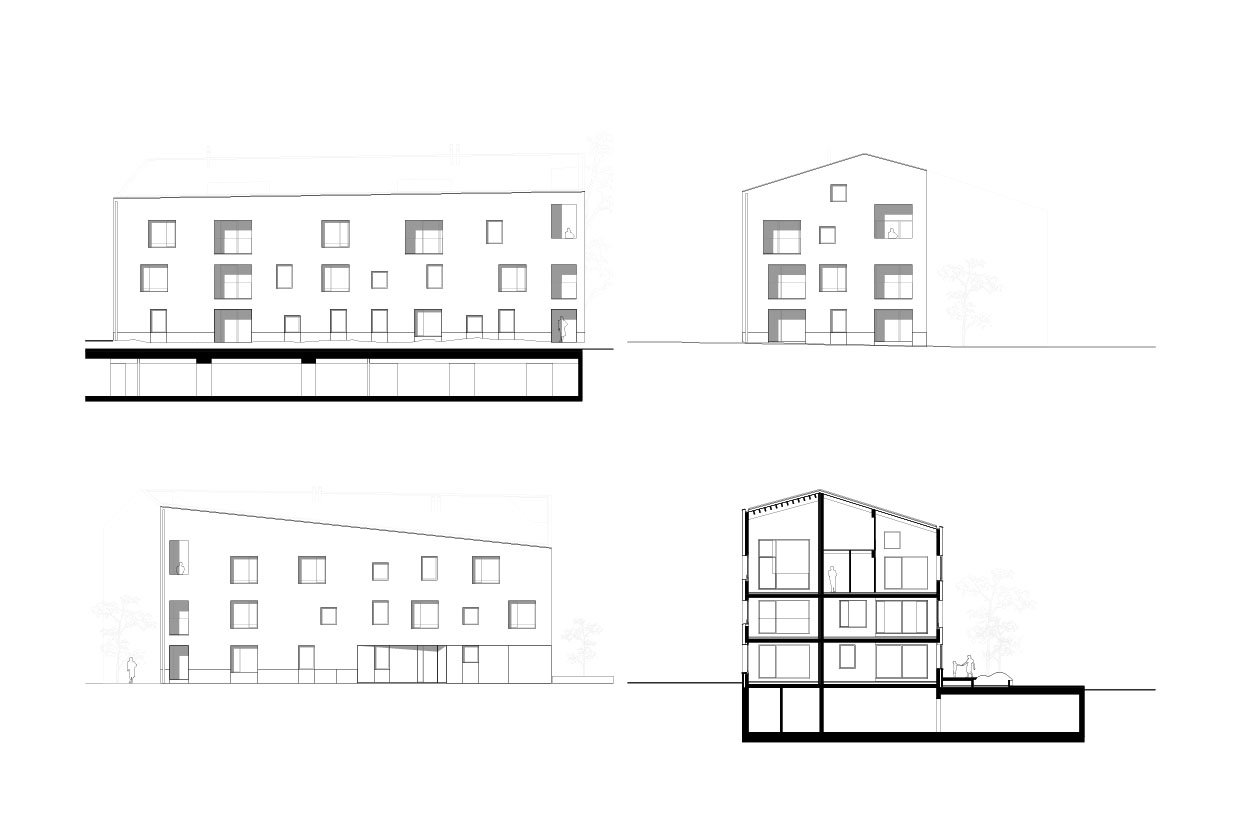 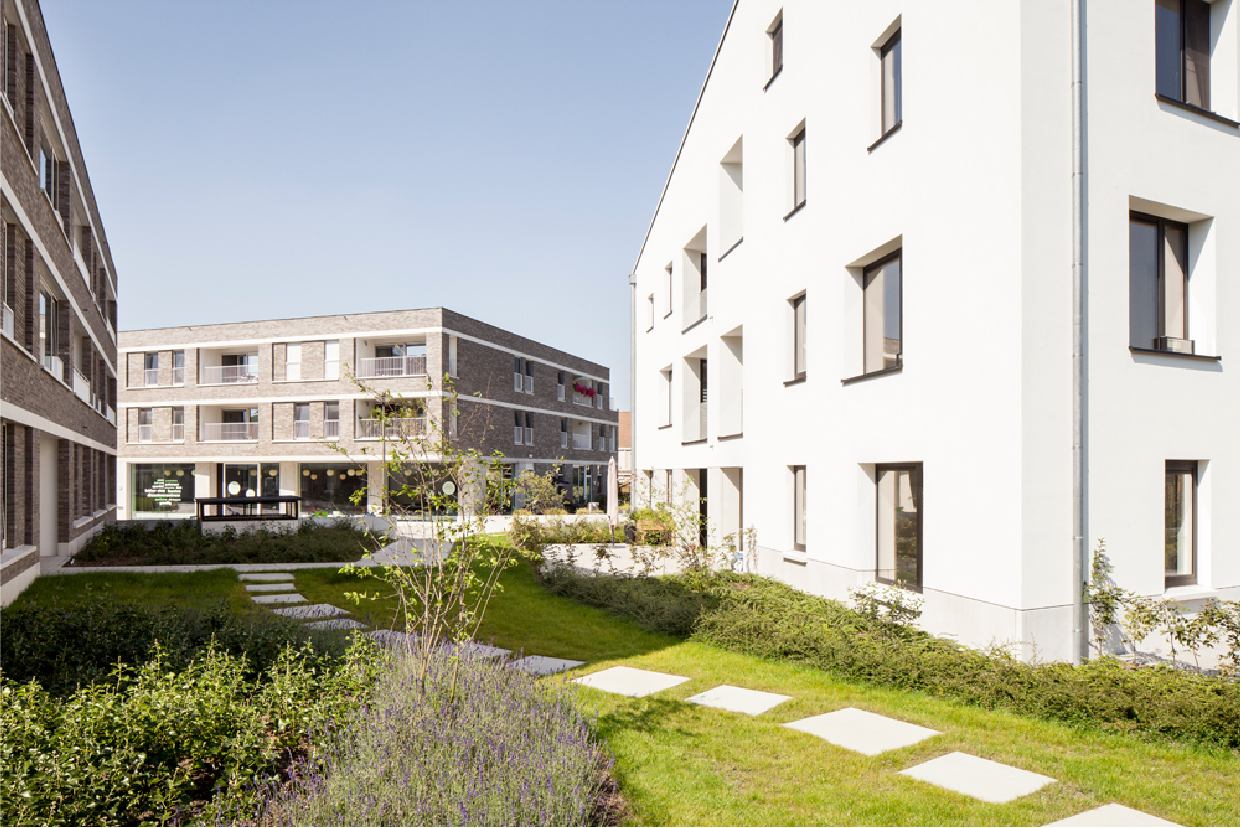 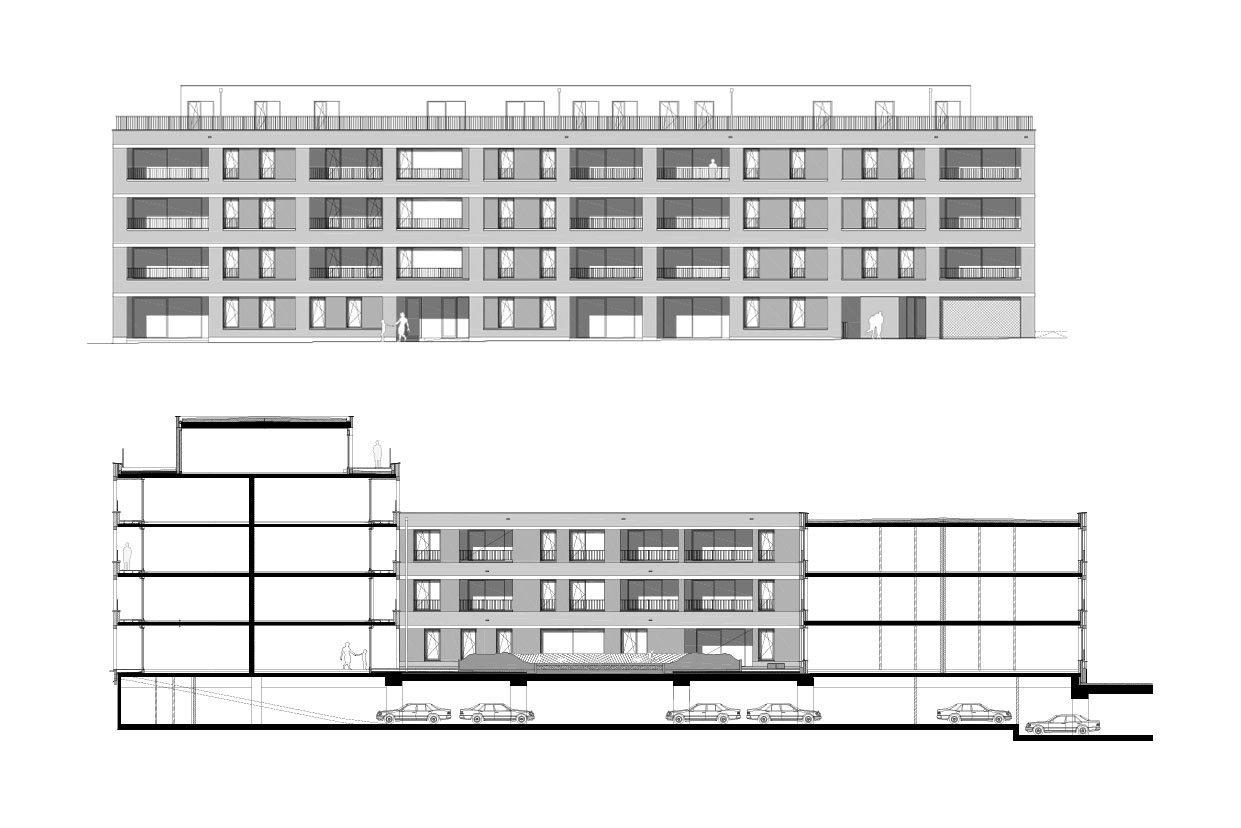 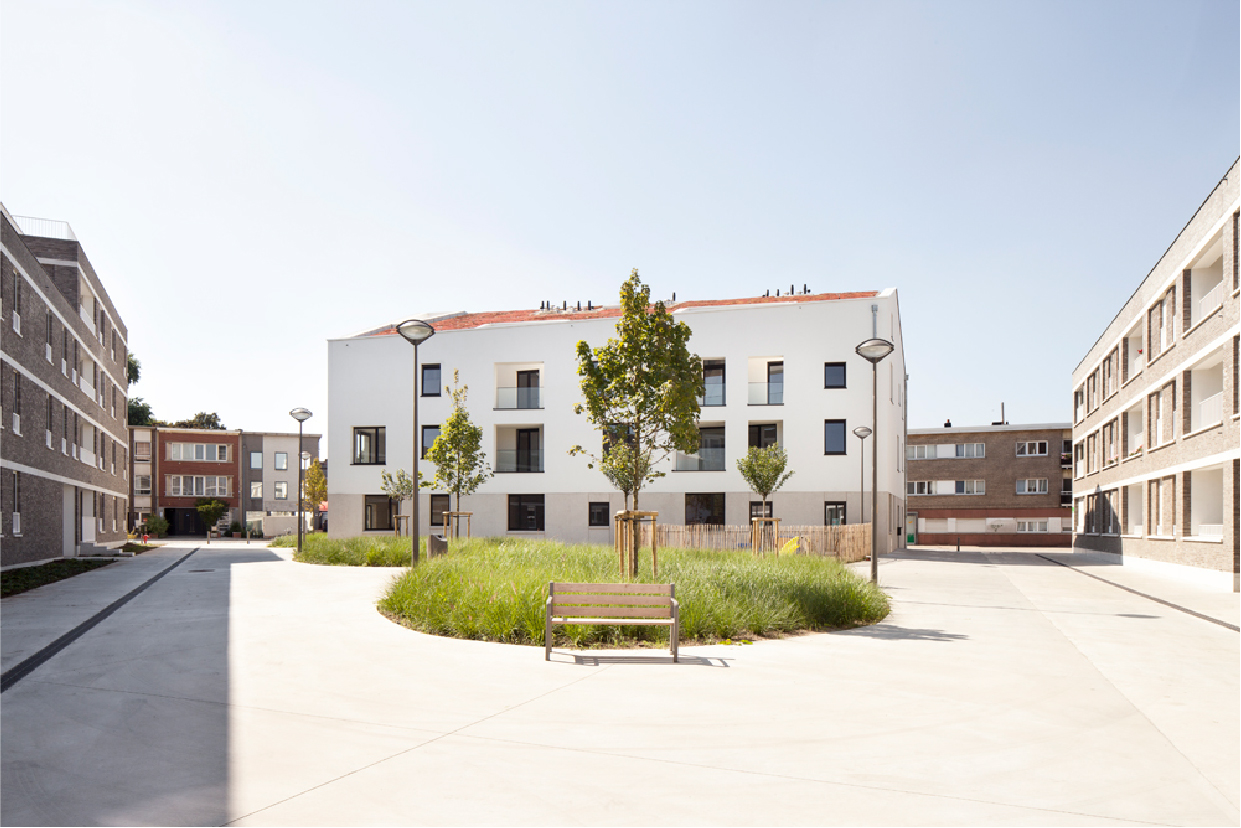 The Veldekens is a mixed residential project which represents the final stage of a large-scape urban development project around a central park zone.

Our design consists of the creation of a transition zone – a kind of urban antechamber – between the new campus-style constructions around the park and the existing block structure of the adjacent residential area. Two buildings on the edge of the site allude to this block structure and complete it. They form a sturdy framework for a hardened square where two smaller, detached buildings are positioned. The latter are a prelude to the buildings in the park.

The tilted arrangement of the volumes creates a coulisse effect. This ensures that the development assumes the middle ground between an independent, enclosed space and a transit space. The project consequently has its own position, connected to the larger area of the neighbourhood as a whole. The buildings at its edge play host to service flats and more spacious care facilities respectively. Both buildings share the same structure, articulation and materials. Their reticent, repetitive form is primarily aimed at generating a background for the public space in between.

The detached buildings’ more sculptural forms and softer use of materials allow them to assume a more prominent role as genuine components of the square. On the ground floor are located small-scale commercial plots, on the upper floors, residential spaces. Both buildings guide passers-by by virtue of their position and thus form a public thoroughfare.

The project comprises an intergenerational residence concept in which service flats are complemented by support homes and homes for young families. The latter are located in the rear, detached building. They have gardens which open out onto the park.

Via the composition of all four buildings, this project places the emphasis on the unconstructed space. This space connects the buildings and is a collective outdoor space for the intergenerational project but also offers the surrounding neighbourhood an additional point of access for the existing local park. The primary public functions are housed at this point of access.