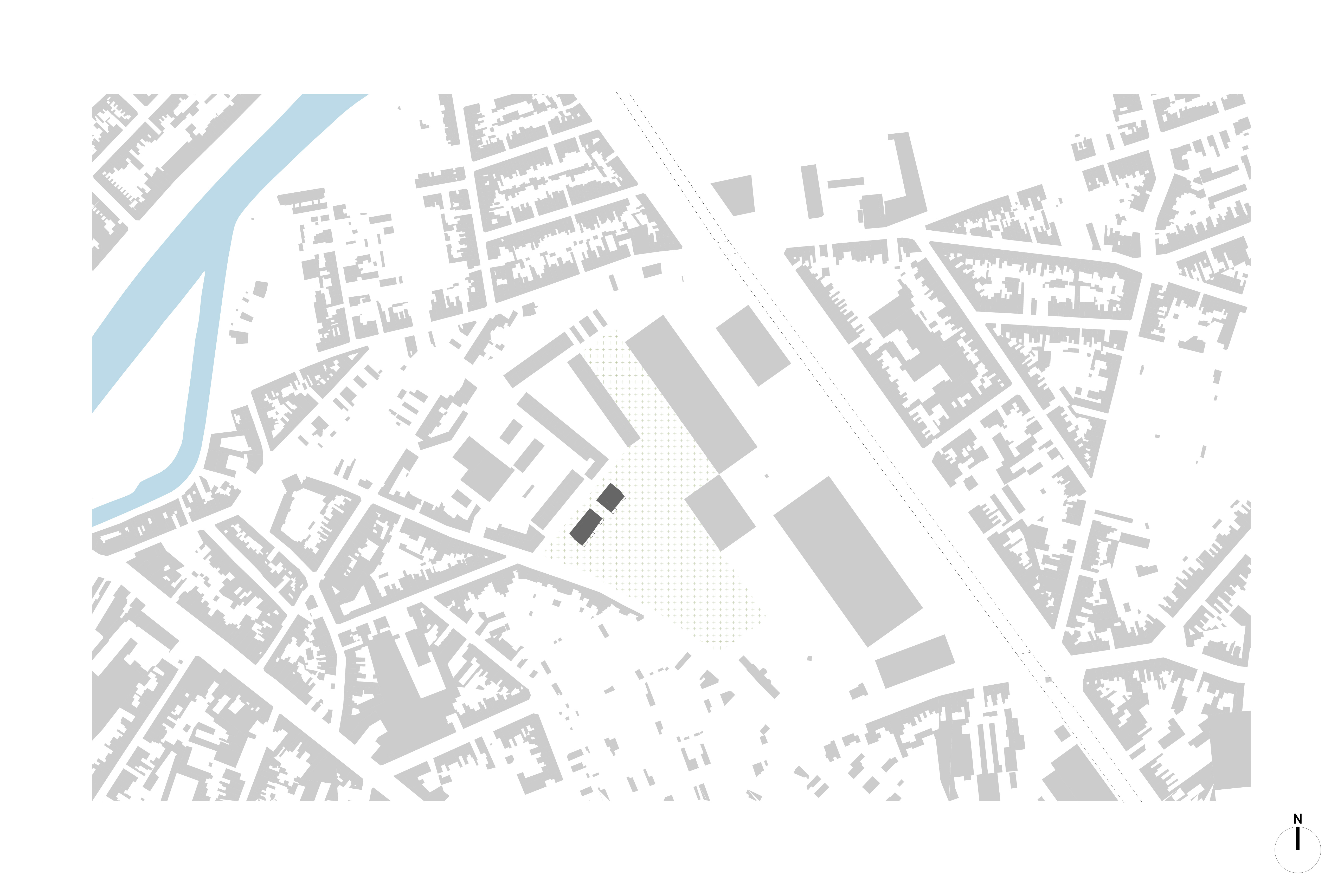 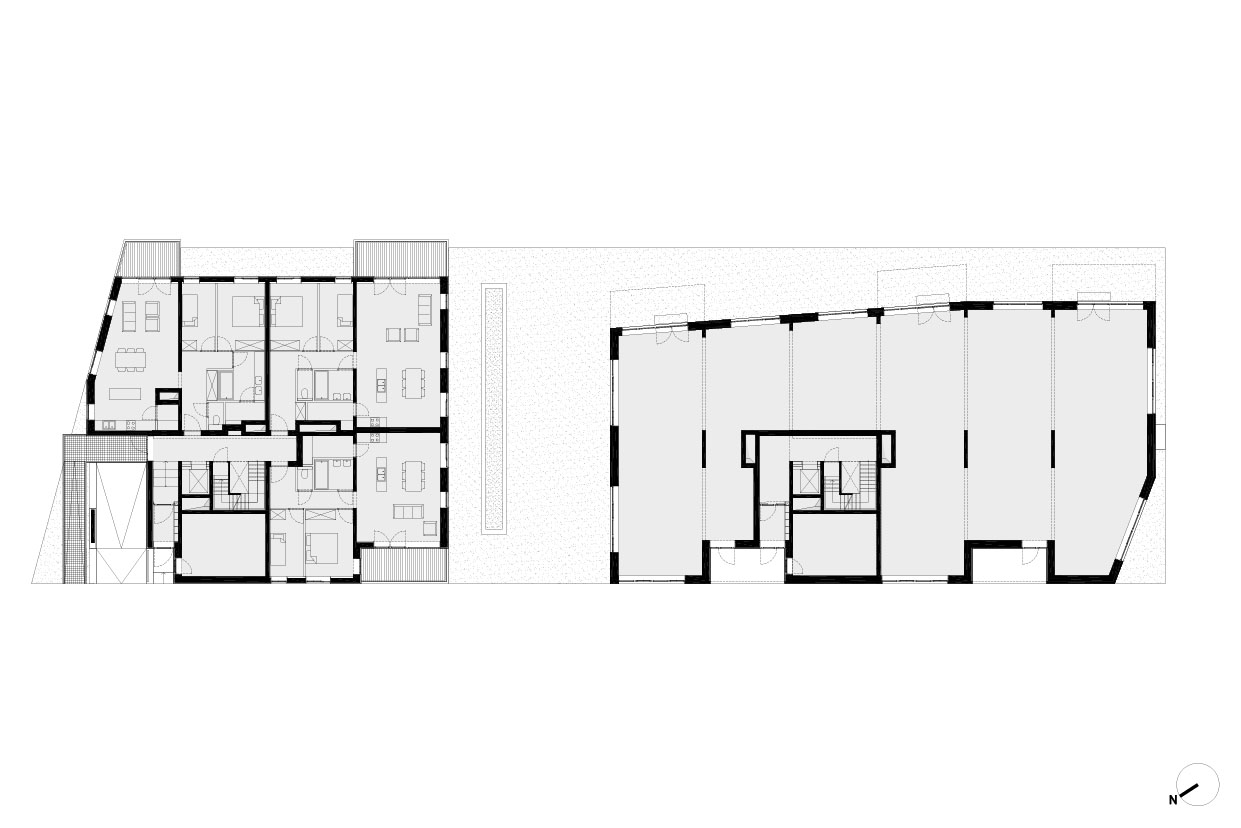 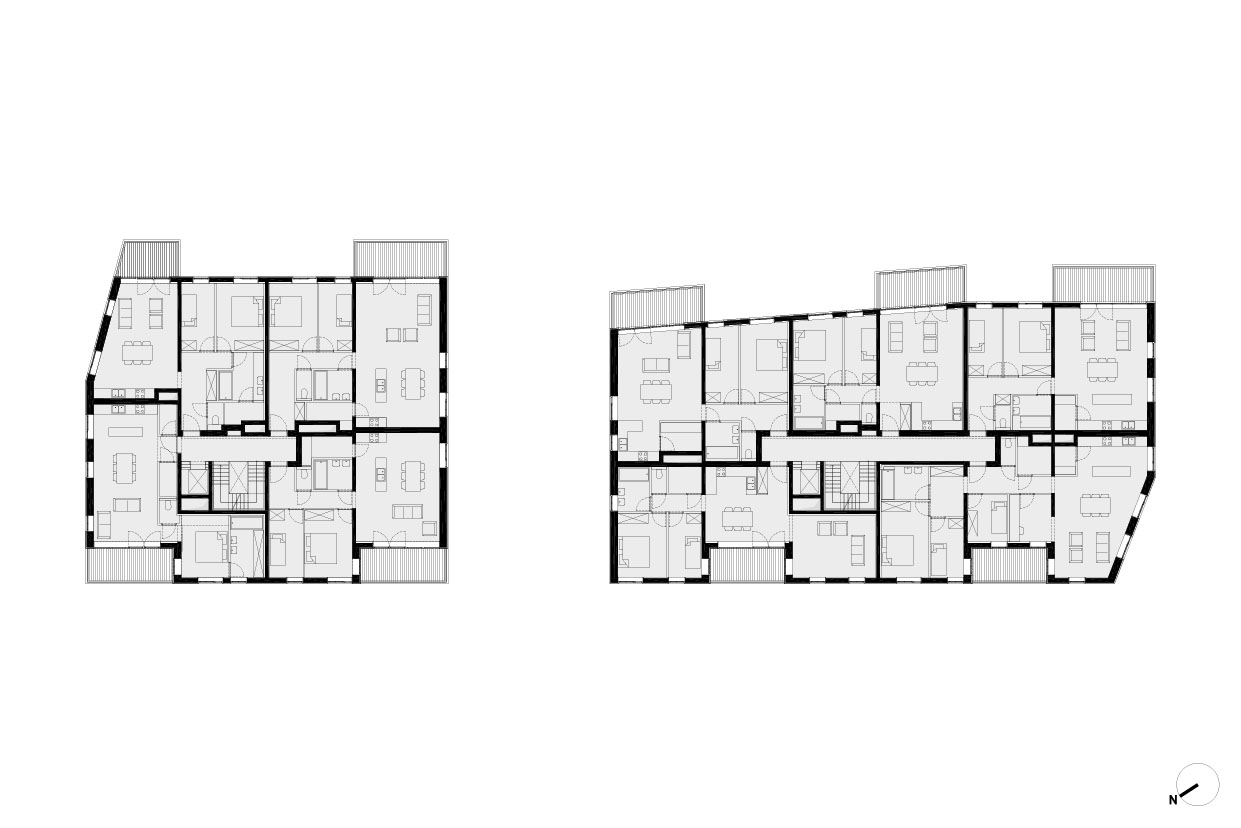 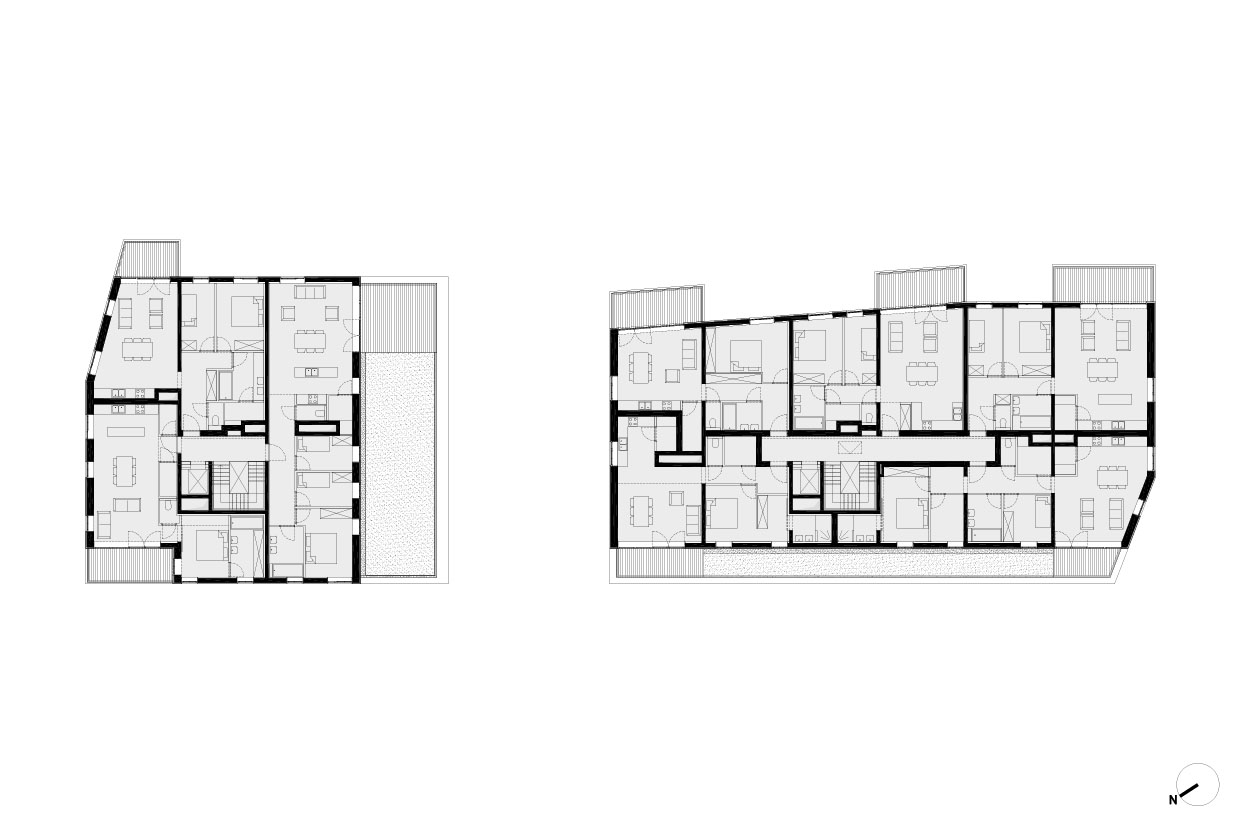 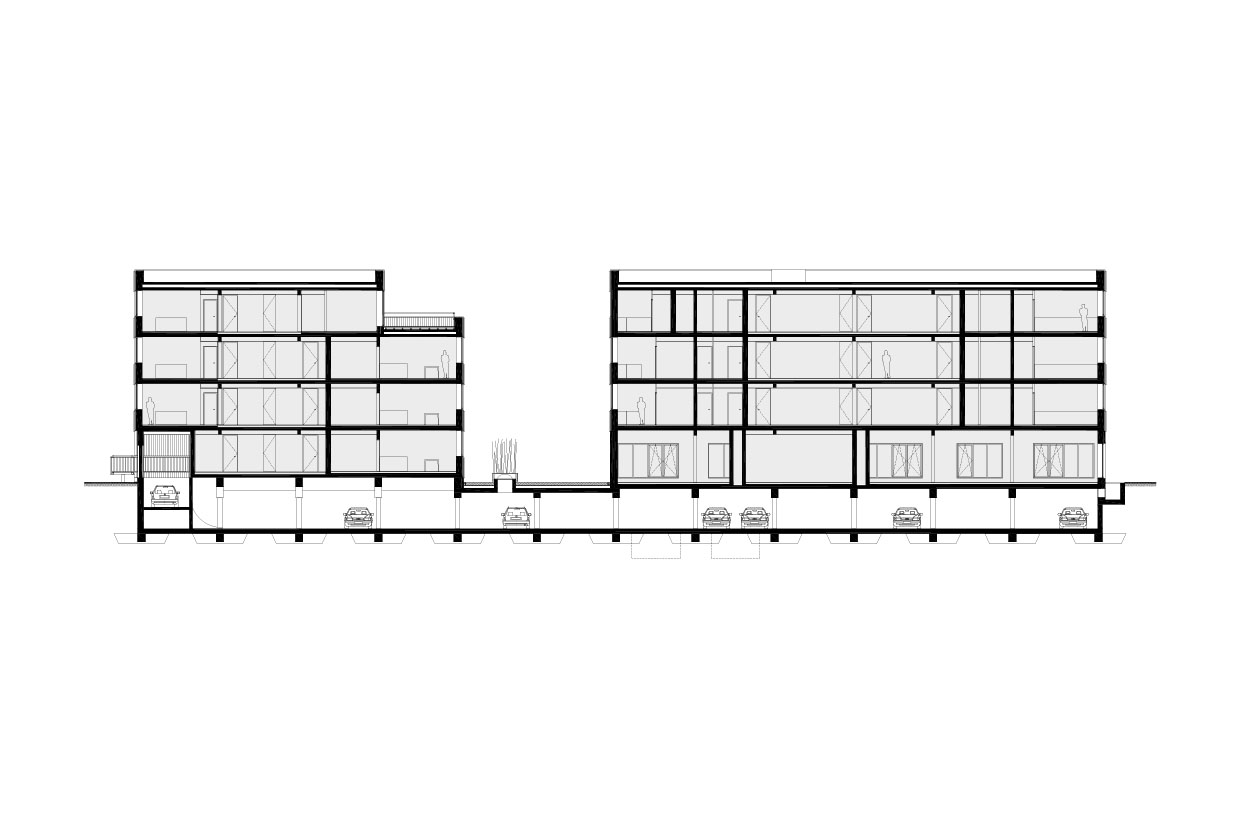 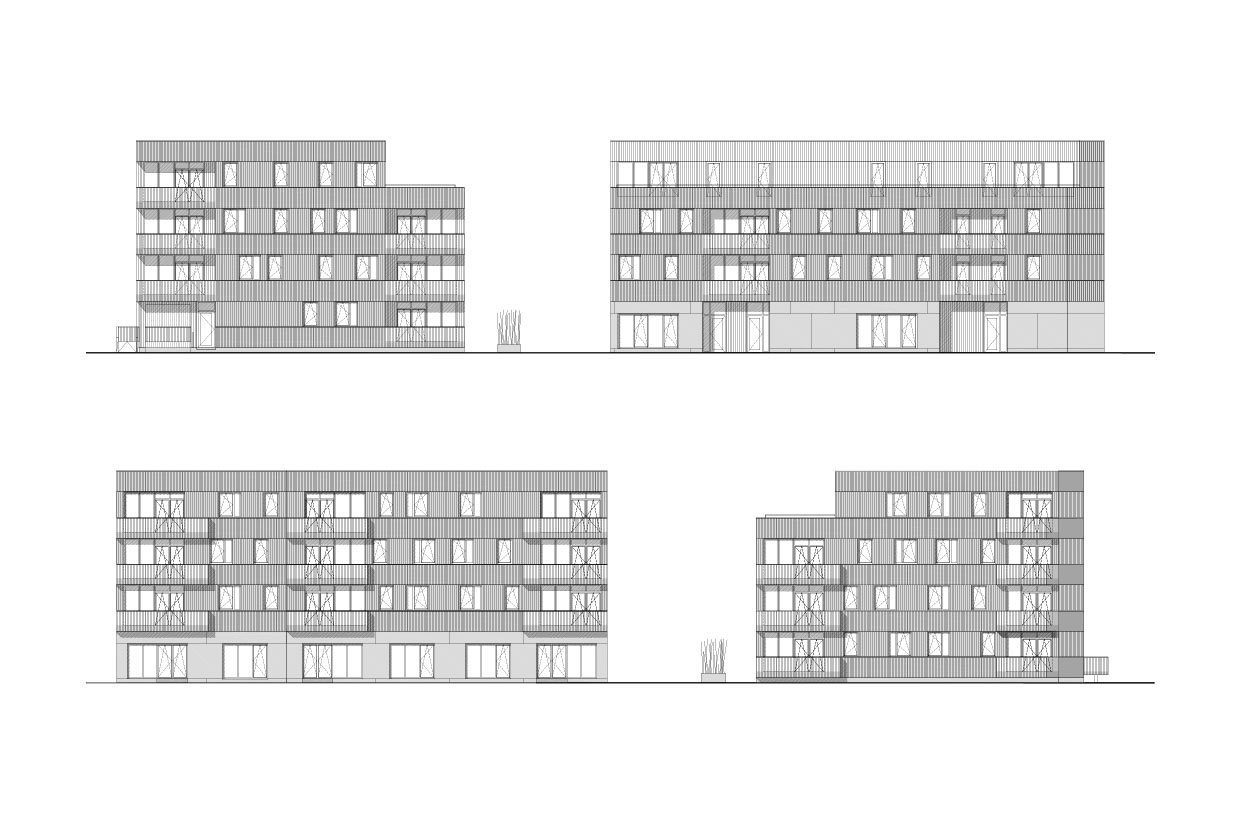 The ‘Den Draad’ project consists of two new residential buildings on a brownfield site which is earmarked for redevelopment into a new, sustainable residential zone and a green neighbourhood park of 1.5 ha. In this context, the margins of the existing block are completed with new residences. On the boundary between the park and this new street façade, two residential buildings have been conceived, which assume a prominent position at the edge of the new park zone. The buildings were positioned as a function of optimal and cost-effective soil decontamination. They constitute the point of transition between a residential area with continuous blocks and a public park.
Despite the differences in form – caused by the surrounding conditions of the site – the buildings form a dyad. Both are typified by robust volumes which elegantly give way to a group of trees, a passageway, an incision which forms the entrance to an underground car park, etc. Both buildings are also compact volumes in which the residences are oriented towards the park as much as possible. That compactness is a very important aspect of producing energy-efficient homes, whereby the volumetric diversity nonetheless results in a differentiated image.

The architecture of both residential buildings is based on the unique, shared position at the edge of the new park. In contrast to the vertical rhythm of the existing and new street facades, these buildings resolutely play the card of a horizontal image, insistent on expressing the autonomy of the buildings and of the view on the park. Each residential unit comprises an extensive exterior space and views on the park which embody this concept.
The exterior walls consist of bands with a changing rhythm of larch planks and slats which direct the horizontality of the architecture. The wooden siding is not only in keeping with the concept of creating as energy-efficient and sustainable a project as possible but is also aimed at enabling the buildings’ integration in the natural frame of the park.
Where the buildings join the park at ground level, the transition is materialised by means of a subtle skirting in high-quality façade concrete which mirrors the same structure as the grain of the above-lying wooden façade elements. The foundations of the building were designed in such a way as to enable compact units with maximum flexibility. Each unit has a clear structure of 1 or 2 diagonal supporting walls which enable an individual, personalised interpretation or future modifications.
The project carries a high sustainability ambition: alongside low-energy standards, it was also designed for maximum adaptability and durability over the course of its lifetime using NIBE-class-3-compliant materials or better.