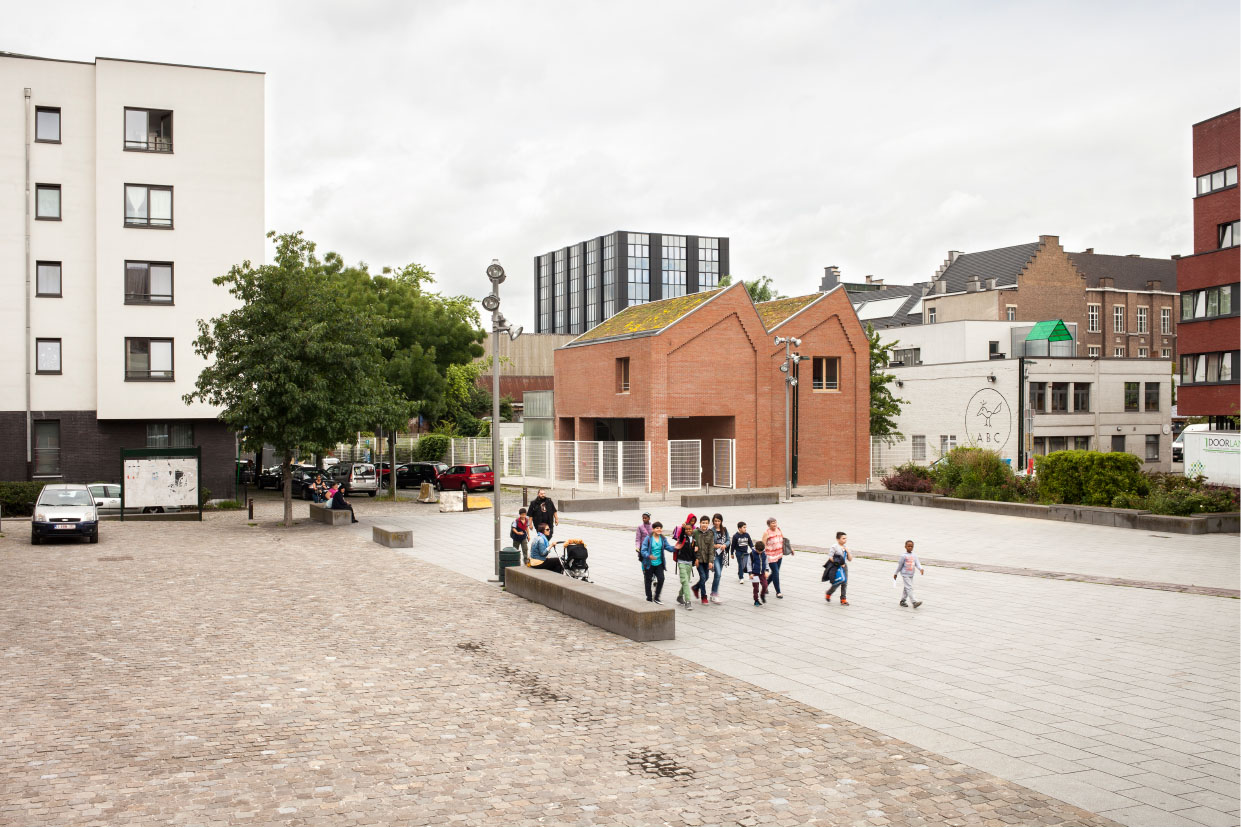 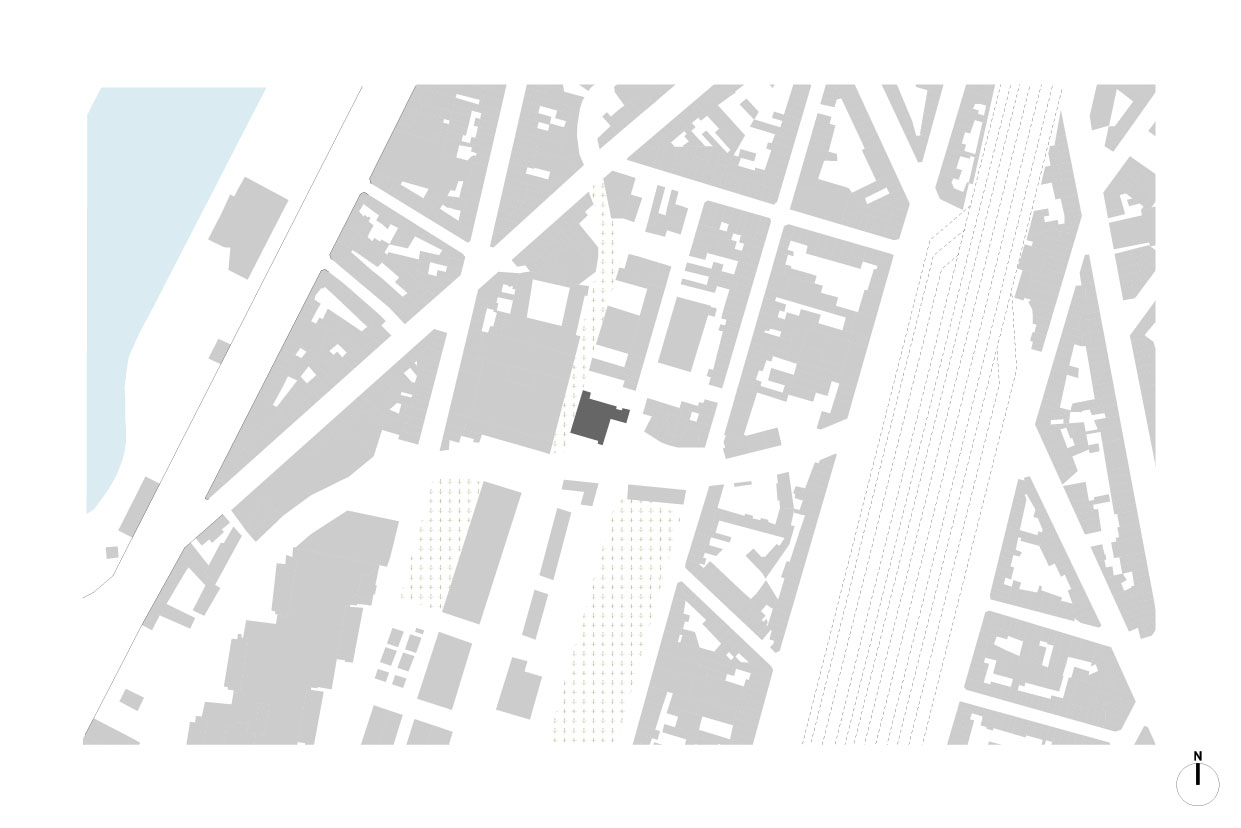 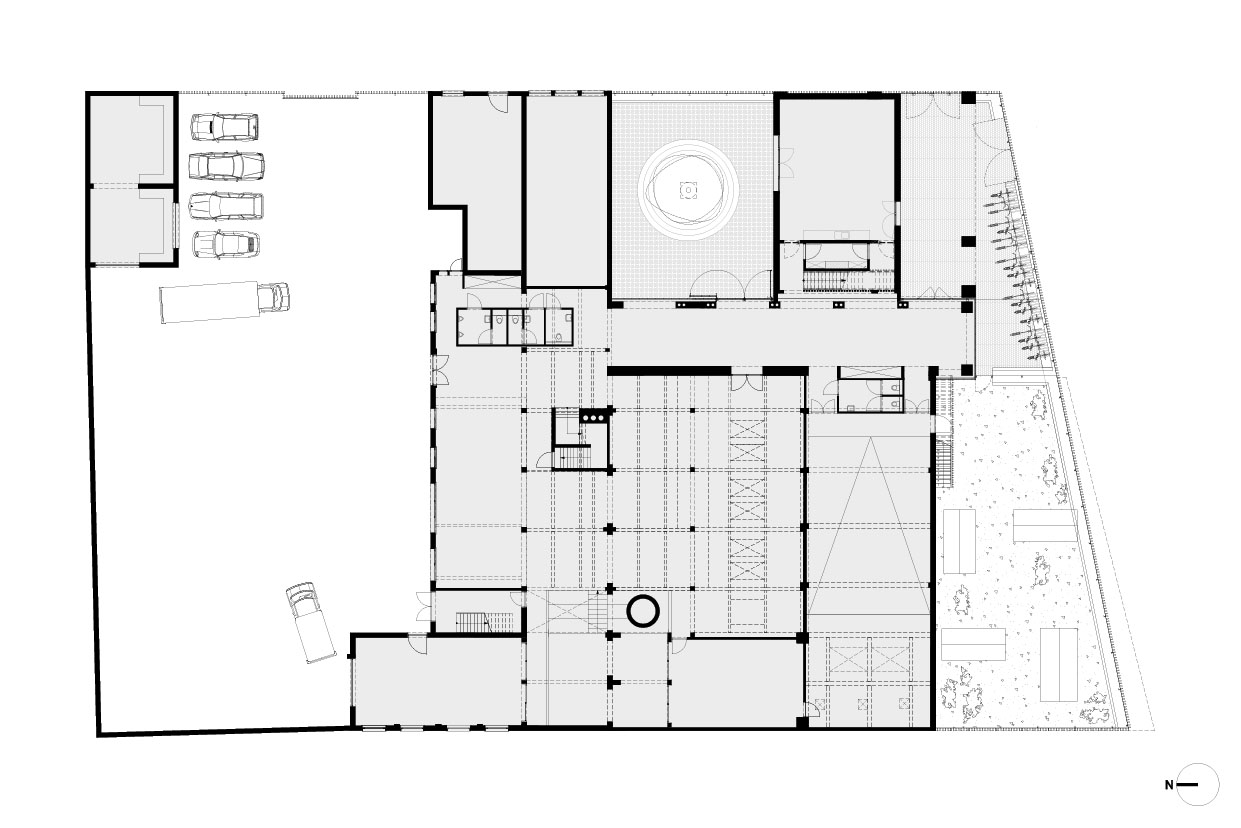 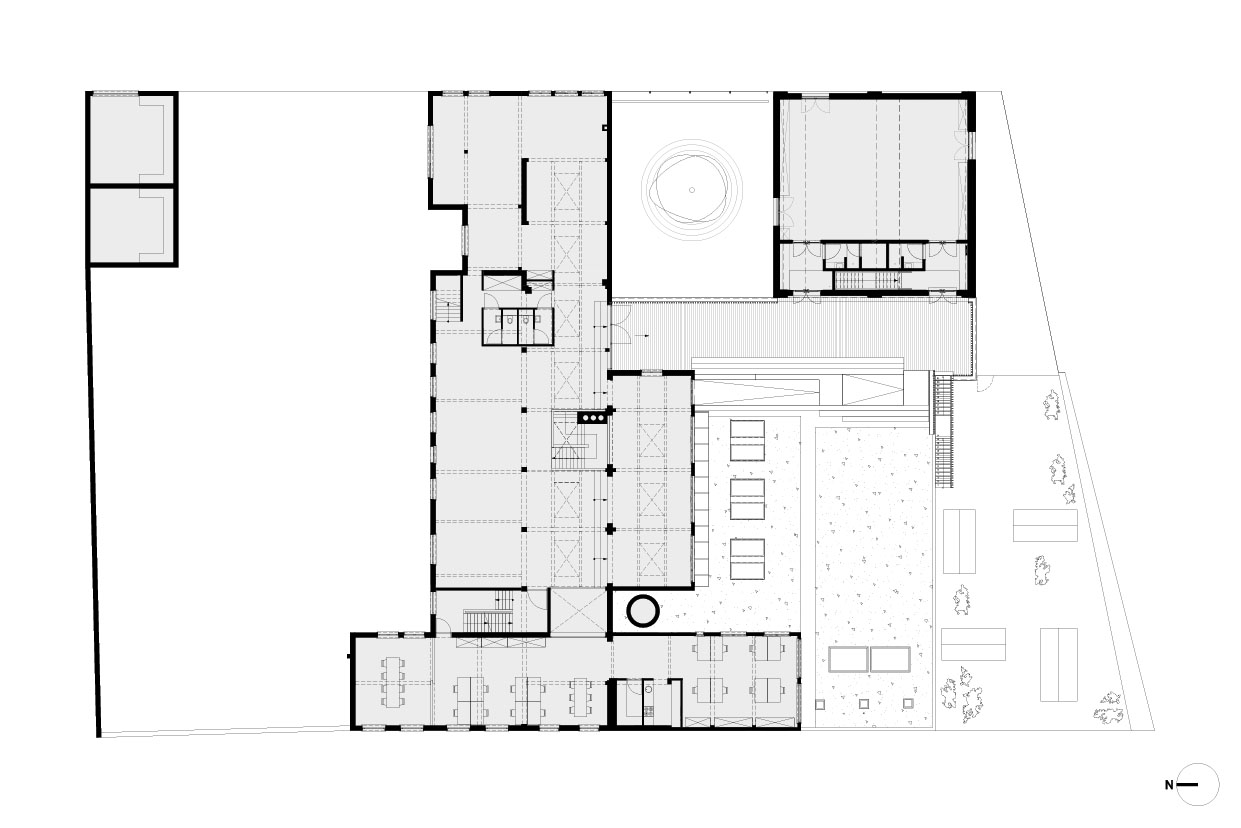 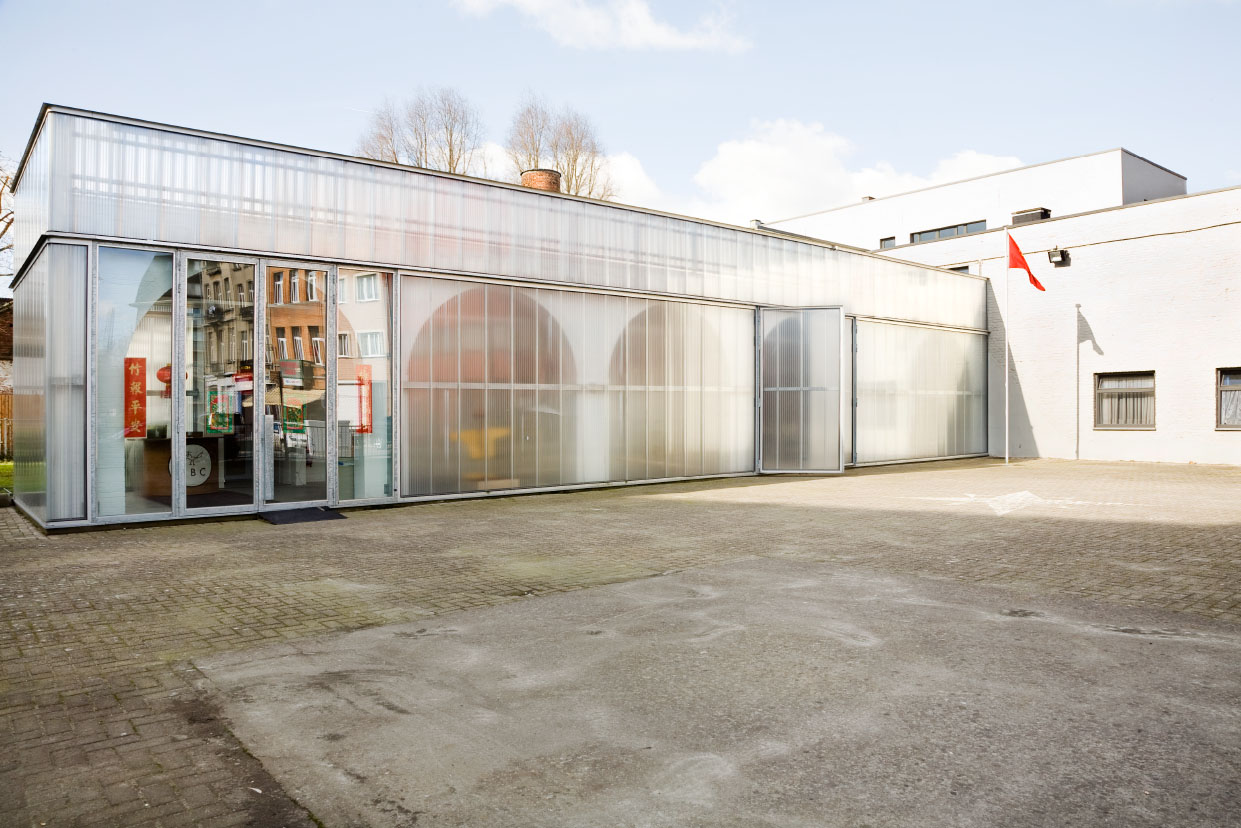 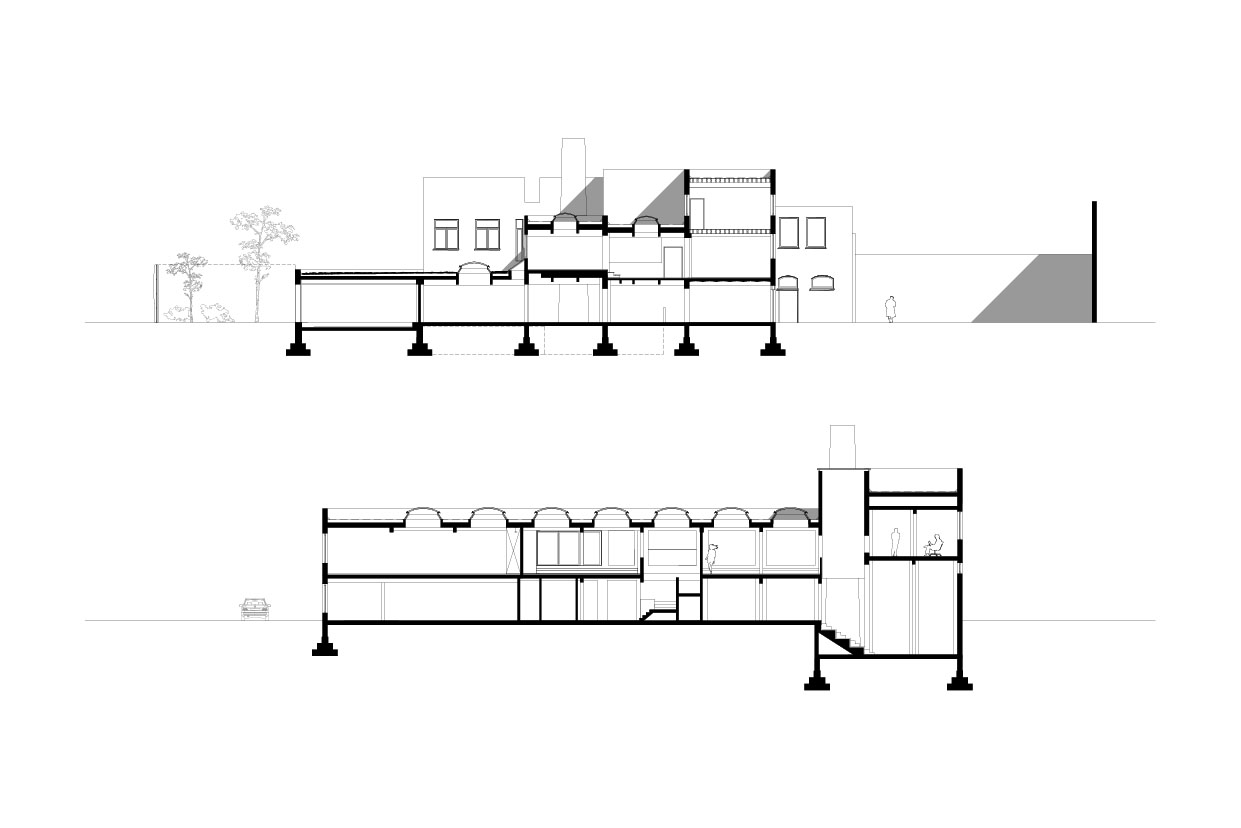 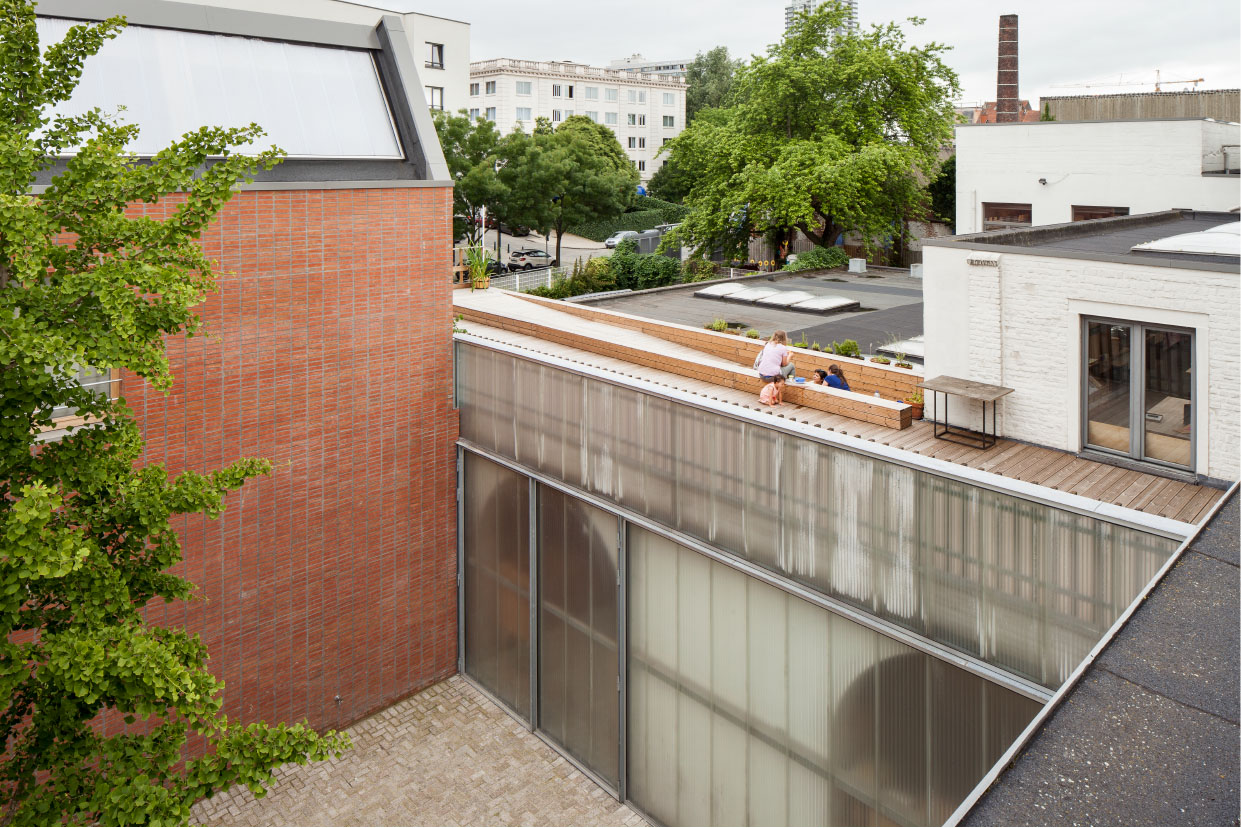 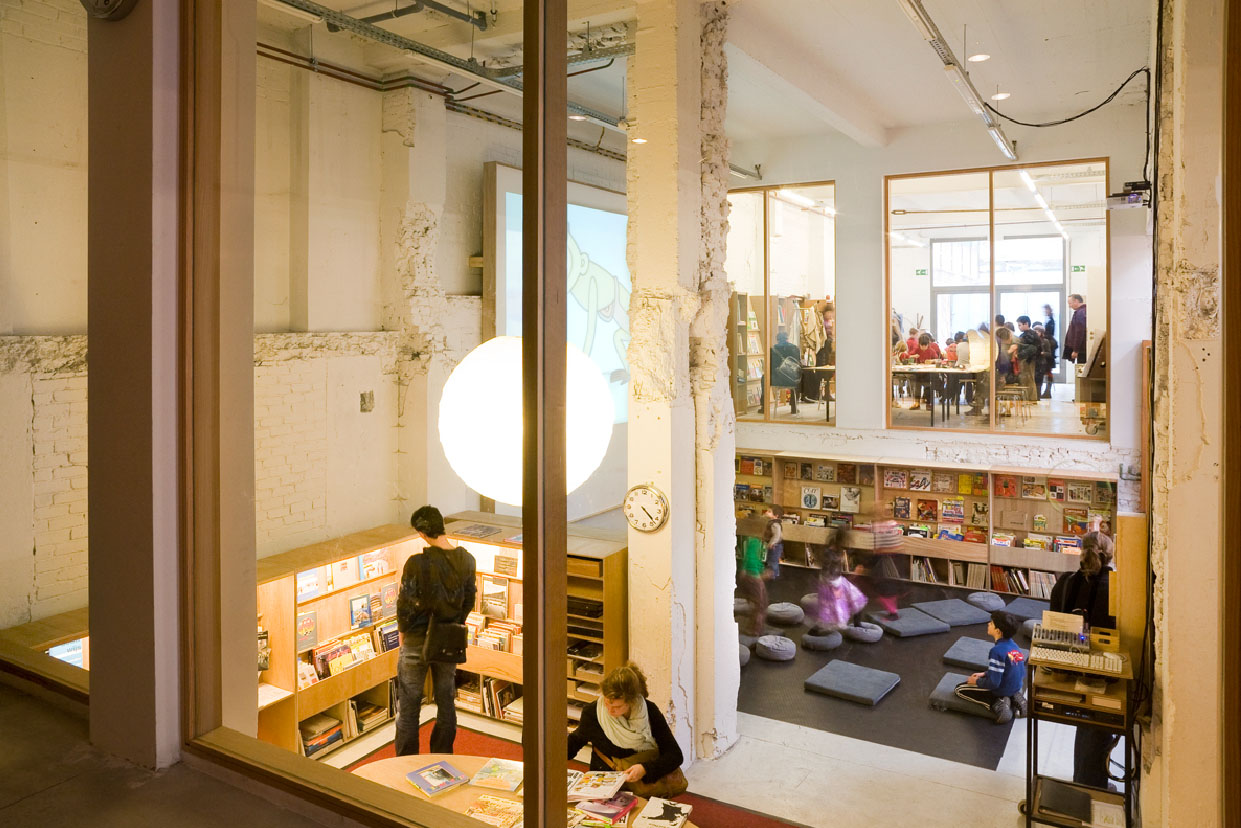 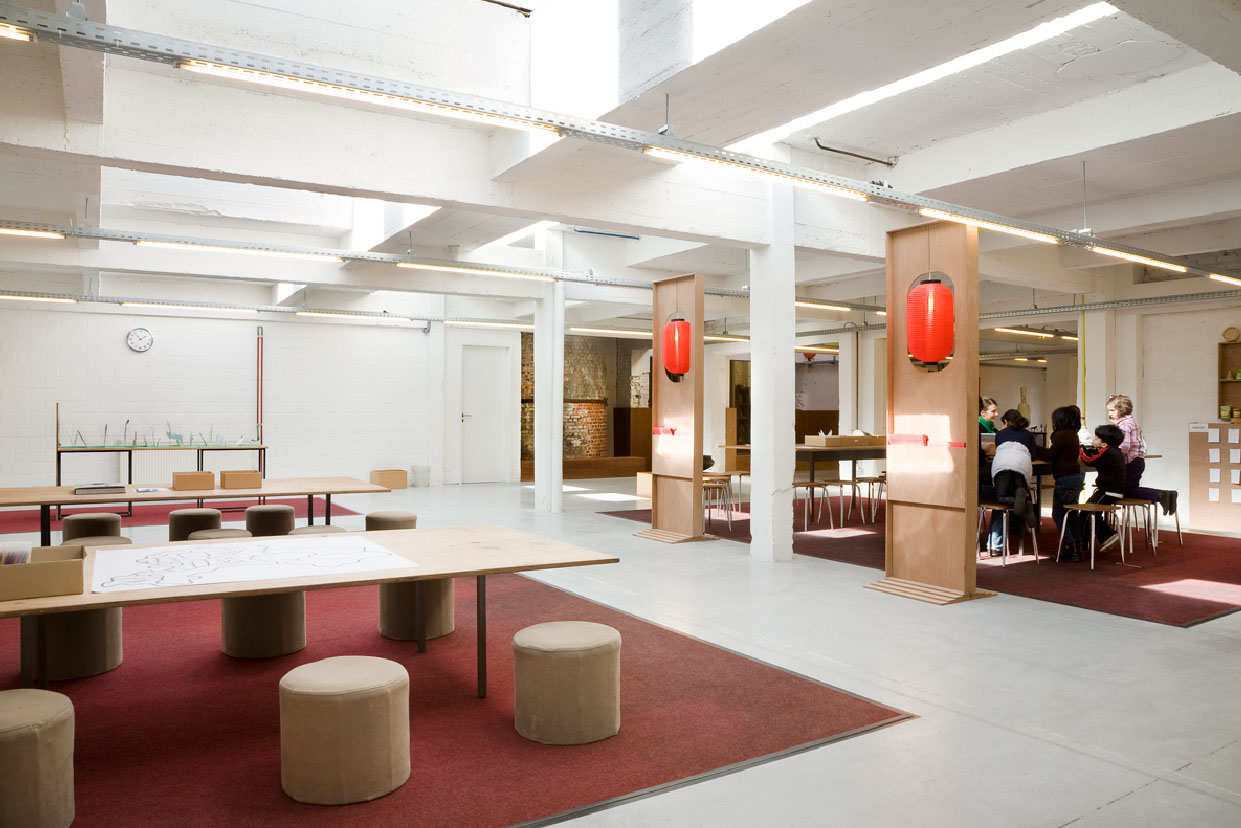 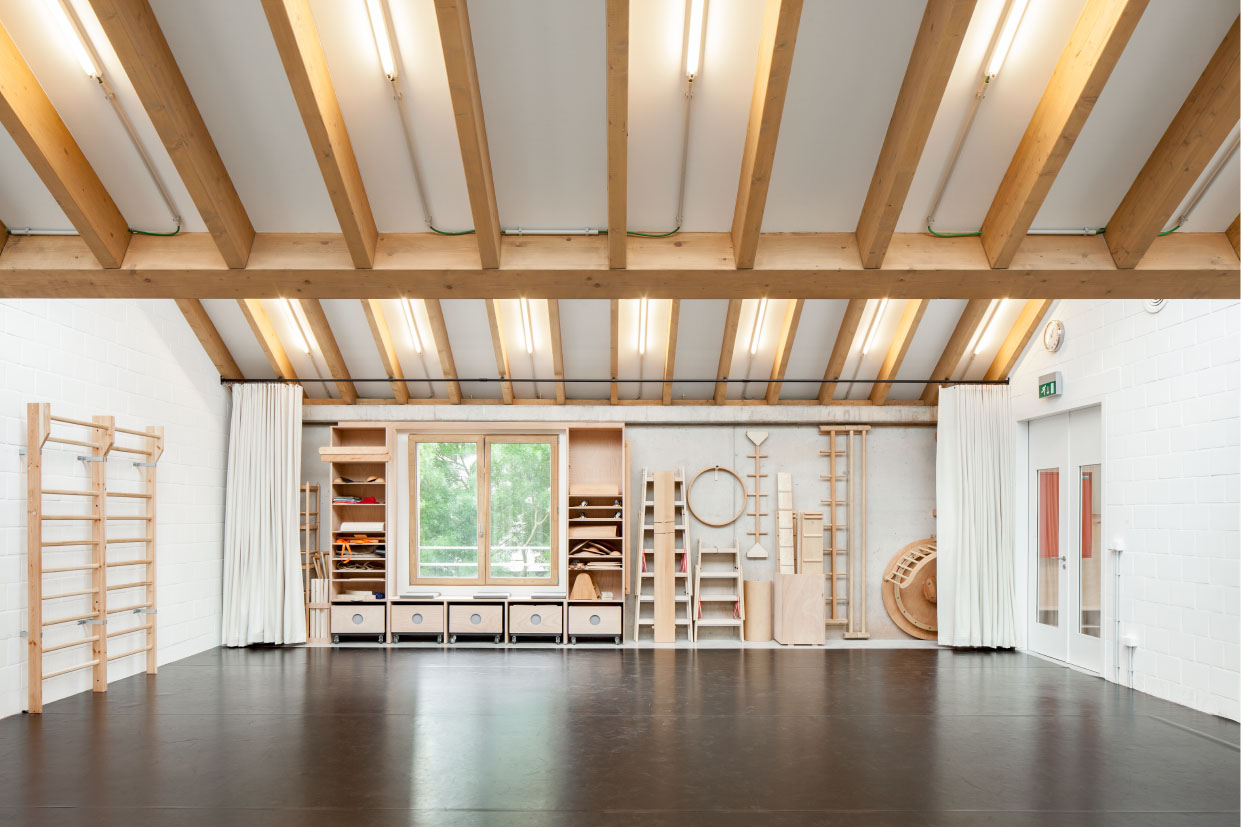 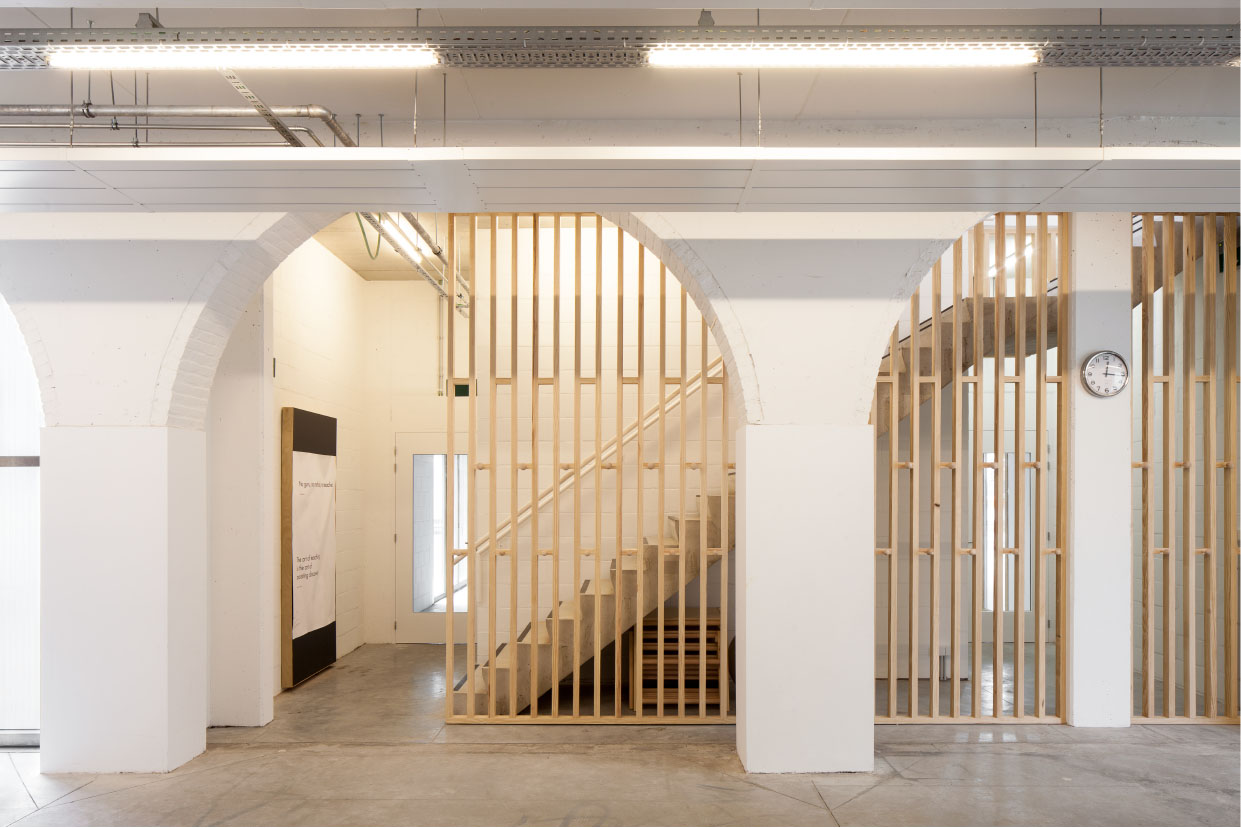 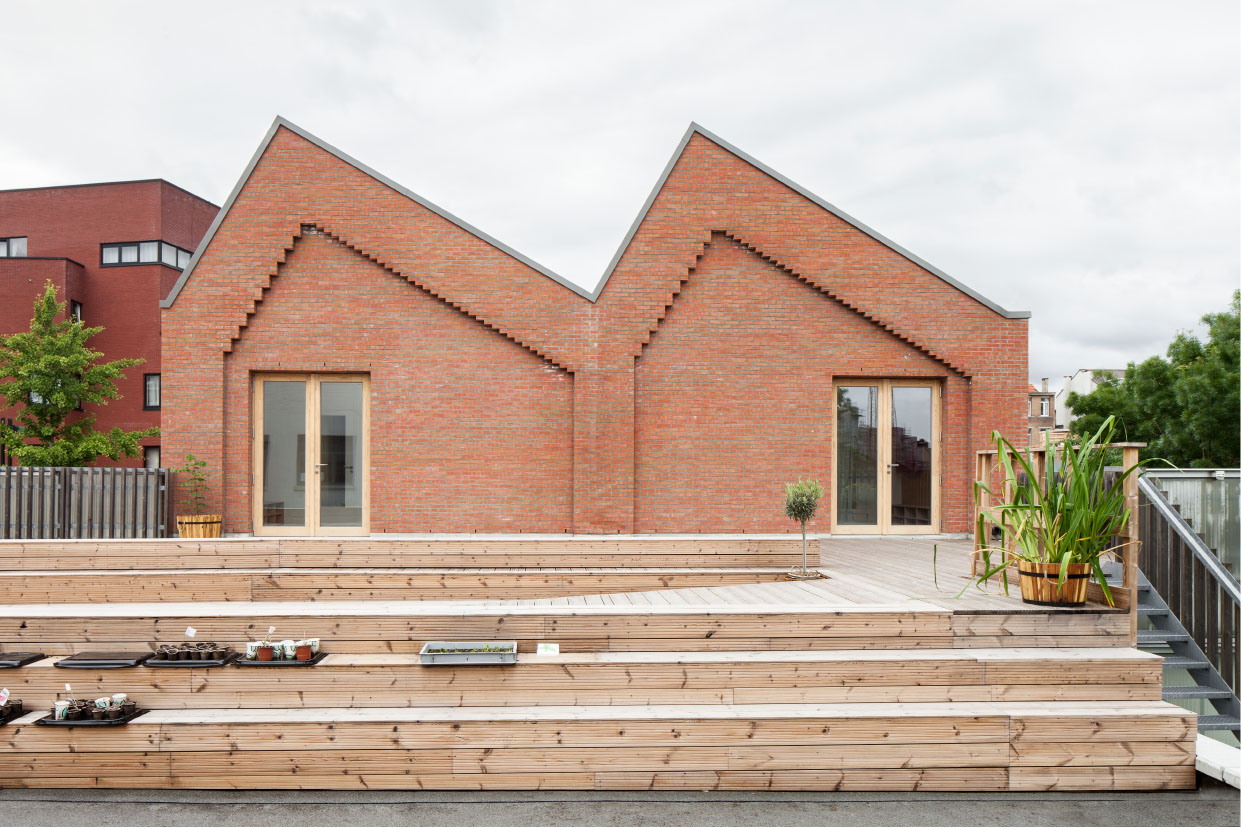 The 'Fabriek', located on a corner in Schaerbeek bordering Noordwijk is renovated into the home base for the organisation Art Basics for Children. The location of the old industrial complex is characteristic of the friction between the corporate office environment of Noordwijk and the heterogeneous urban fabric of Schaerbeek. The underlying goal of the renovation of the 'Fabriek' is to allow space for ABC to work in this urban field of tension between the corporate and socio-cultural environment surrounding the site.

The building enters into dialogue with this dynamic by restoring the existing gallery as an entrance and provides the impulse for an accessible organisation structure inside the building. In a second phase, a newly constructed building with public kitchen and dance studio will reinforce this interactive zone on Gaucheretplein. The other open space on the plot is put to optimum use as connecting space between the internal operation of the building and the external public spaces such as Gaucheretplein, Jollystraat and the bedding of the Senne. A subtly designed fence helps gives definition to these relationships.

The budget is low and the state of the 'Fabriek', problematic. Which is why this project resolutely chooses to adopt a purely instrumental attitude with respect to the building and the operation of ABC. The facades and structure are reduced to their essence while simultaneously solving the building’s most pressing structural problems. This low-key approach is counterbalanced by exceptional architectural interventions at strategic places within the building. These interventions not only improve the legibility of the ‘Fabriek’ as a platform for ABC but also exploit the potential of its layered, industrial past. A theatrical atrium is created inside the building which links the various workshops, the film studio, the library, crèche-café and the amphitheatre. (see figure)

In time, an organic ensemble manifests itself which is nevertheless structured and flexible enough to support the varying programmatic exploitation of the building. As a consequence of the generic character, alternating with intermittent exceptional interventions, the building can easily house new, potential functions over the long term.
The materiality of the building is deliberately rough and – resulting from the construction economy – also unfinished. The tension created with the tactile multiplex wooden studios that is so distinctive for ABC is given full rein here.

The building and its functional exploitation are brought to life with the construction of studios and activity stations. These spatial, architectural installations aim to make a design statement while immediately exuding and improving experiential quality. In each studio, ABC has tried to create a mental and physical space which, on the one hand, almost self-evidently puts the visitor at ease while stimulating curiosity on the other.

The building and its layout is not only a logistical support for ABC’S activities but also becomes an educational tool in itself. By working with different structures, forms, textures, materials, etc., it is intended to convey something of how life is defined by the nature of our spatial context.